8 stunning castles in Poland that look straight out of fairy tale! 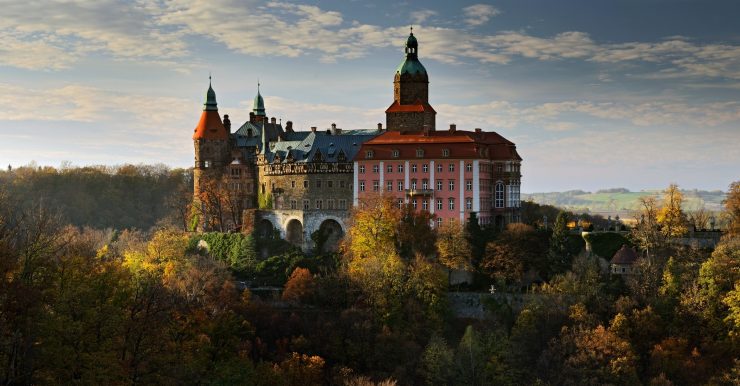 So everywhere you find castles and cathedrals from the bygone eras. What’s the big deal? Well in Poland whose rich history is as fascinating as the dreamland itself, you might want to look beyond the captivating architecture and the crumbled buildings. There’s more to its sky-piercing gothic castles than catching eyes — they stand to tell tales of primeval Europe to this date.

Let’s dive deeper. Here are some of the most stunning castles in Poland that look stolen straight from fairytales.

Lounging atop dense forests overlooked by the paradisiacal Waldernburg mountains, it looks like it inspired the Harry Potter verse. What’s intriguing is that it manages to stay majestic despite the numerous devastations caused to it during wars and the several ransack attempts when it was handed over to different dynasties during different times. Having the privilege of reigning in this castle for 433 years, the Hohberg family lost the castle accused of treason 1941. Game of thrones? Ned Stark? Me too!

Known as the castle of the Teutonic order, Malbork castle located on the brinks of river Nogat is one of the best examples of medieval Gothic architecture. Uniquely built in Teutonic style, Malbork is one of the largest brick buildings in the world and the largest castle in Europe.

Where much of Polish administrative system and laws underwent many evolutions to end up how they are now. Giovanni Battista di Quadro along with other renowned architects managed to make the castle ruined by world war II shine in new light. Polish monarchs emphasised the preservation of the royal castle as they believed it to be the main hub of Polish culture.

Still casting its renaissance spell on its visitors, this enchanting “Little Wawel” by River Vistula has is steeped in the traces of Guccian architecture, Falconian interiors and major royal families of Polish descent.

What was started out as a safe keep is now a prestige inn for travellers while serving to be refugee haven, military camp and armour repository along the way. You should absolutely steal the chance to stay at a royal palace once in your lifetime!

This exceptional fusion of renaissance and baroque is a sheer pleasure for the eyes of history geeks. Follow the footsteps of the Lubomirski family and the scars made by Swedish wars that still stay etched in the crumbled walls of this ancient marvel.

Engulfed by river Dunajec in all directions, this castle sitting high at 566m above the sea level is the most beautiful castle in the whole of Europe! This most idyllic of backdrops is by far the unparalleled attraction when it comes to Polish wilderness.

The reason Moszna is saved for last is its unequalled historic significance in how far Poland as a country is influenced by the notable evolutions in Europe history.

Outright fascinating don’t you think? You don’t need a time machine to travel back in time for getting the best of Europe’s history. You just need Pickyourtrail, which can help you plan your Poland trip and it’s absolutely the same!

Sweden | Italy and Switzerland | Greece and Turkey | Spain and Portugal