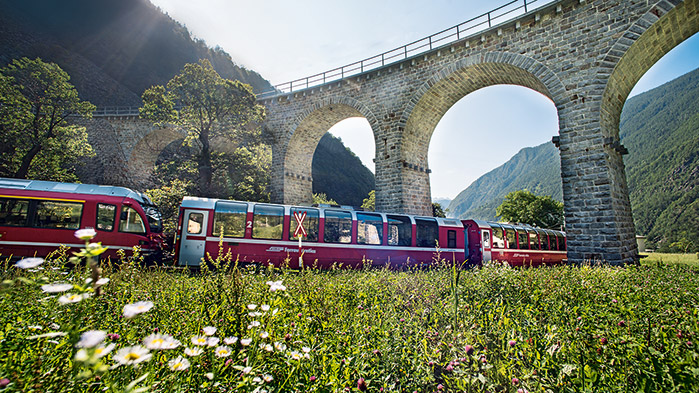 Hop on a train in Europe, sit back and watch majestic snow-capped mountains, vineyard-laden valleys and picturesque lakes pass by you as the train snakes through beautiful tunnels and viaducts from centuries past. Excited? Here’s a list of 9 spectacular train rides in Europe that you simply should not miss!

Planning a trip to Europe? Let our travel wizards plan your trip for you so you can travel the continent the easy way with Pickyourtrail.

The West Highland Line is considered as one of the most scenic train routes in the world. Starting from Glasgow and ending at Mallaig, the 264km long train route takes you through farmlands, castles, moors, lochs and through some of Britain’s most remote stations. You will also travel past Britain’s highest peak, the Ben Nevis and also enjoy a bit of Harry Potter magic by travelling through the Glenfinnan viaduct used by the Hogwarts Express!

Alternatively, you can take the Fort William to Mallaig route via the Jacobite Express for a shorter but equally awe-inspiring route.

Travelling through snow-clad mountains your thing? The Bergen Line is for you. Connecting the two major cities of Oslo and Bergen, the route takes you above the Hardangervidda plateau, making it the highest train route in Northern Europe. At a height of over 4000 feet about sea level, the views from the Bergen Line are nothing short of extraordinary. Islands, fjords and snow-laden passes fly past as you look out the window. On the second part of the seven hour journey, forests, picturesque lakes and huts dot the route.

More of a road trip type? Check out these 5 must-take roadtrips in Norway!

With Norway’s natural beauty and incredible train routes, it’s no wonder there’s another entry from the same country. Unlike its Bergen counterpart, the Rauma Line is shorter and runs from Andalsnes to Dombas. The train ride is recommended by travelers as a must to really enjoy the beauty of Norway. The route takes you through towering peaks, mountain meadows, fjords and along the Troll Wall, the tallest vertical rock face in Europe.

You can get off the train at Bjorli, a porpular winter sport destination and enjoy the scenery and the mountain terrain. The train also stops for photo sessions, specifically at the Kylling Bridge, a technological marvel in itself.

Passing through German wine country, this laid-back train ride is one of the shorter ones, but ranks high among the most spectacular train rides in Europe. With the serene Rhine river by the rails, the train takes you by picturesque valleys filled with vineyards, riverside towns and fairy-tale castles. The charming towns of Mainz and Kobenz will leave you asking for more, and the countryside obliges with many beautiful towns by the river that you can visit by taking the slower train options.

Definitely one of the best ways to cross the Swiss Alps, the Bernina Express takes you from Chur in Switzerland to Tirano in Italy via the majestic Alps. The glorious mountains are seen in their full unspoilt splendour from a height of more than 7000 feet! Traversing different locations with different cultures and languages, the Bernina Express is one train ride that you simply should not miss. The Landwasser viaduct is one of the highlights of the train ride. Winter welcomes you with snow-capped peaks, while lush meadows sprawl the slopes in spring and summer.

Do Switzerland the way its meant to be done, with travel tips here.

Starting in the Montenegrin coastal town of Bar, this splendid train route takes you through some truly astonishing scenery to Serbia’s capital city of Belgrade. Passing through Lake Skadar, the main attraction of the ride are the truly spectacular Montenegrin mountains in the Biogradska Gora national park. With an unbelievable 254 tunnels and 435 tunnels along the route, this is without doubt one of the best train rides in Europe.

The Inlandsbanen or Inland Line is one of the longest in Europe, taking you from Kristinehamn in the south to Gallivare in the north, above the Arctic Circle. Recommended as the best way to explore and enjoy the scenic beauty of Sweden, the slow train snakes through the country’s beautiful terrain through various lakes, hills, towns and wilderness. Most of the terrain is really remote even to locals. The route is open for tourists on a daily basis from mid June to the end of August.

The relatively shorter Semmering Line is one that you must take to truly appreciate the technological marvel of railroad construction of the 1850s. The route is constructed through mountains and runs at over 3000 feet at its highest point. The train takes you through 16 viaducts and 15 tunnels, with the beautiful scenery of Austria leaving you awestruck. The railroute is a part of UNESCO’s list of heritage sites.

The Cinque Terre is the picturesque string of seaside villages on the Italian Riviera coastline, making this one of the most beautiful train rides in Europe. The train route remains the easiest way to travel the Cinque Terre, with the train connecting the five major villages of the coastline. Colourful houses, vineyards on steep terraces, amazing local restaurants, harbors, fishing boats and the like dot the scenery. The local trains stop at Levanto, Monterosso, Vernazza, Corniglia, Manarola, Riomaggiore and La Spezia, running 1 or 2 times along the track every hour. Access to the hiking trails in the National Park can also be obtained during purchase of select Cirque Terre passes.

Book your trip to Europe the easy way with Pickyourtrail’s expert planners.

Best things to do in Oslo – Your Most Awaited Trip of the Year!

Austrian delight: Top things to do in Innsbruck for that perfect vacation.