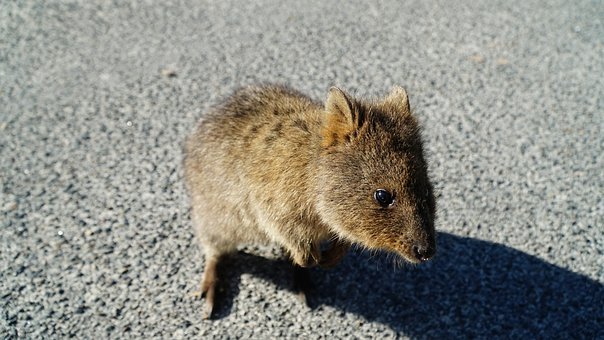 Do you remember seeing a bunch of cute little Quokkas squeaking around in the Ice Age movie? These are the ones with pretty round eyes and funny protruding teeth. These are also the most adorable animals that have a smiling face always. Its cuteness, cheeky grin, friendly personality and resemblance to a mini-kangaroo is simply out of the world. The Australian Quokka is considered as a sign of happiness and positivity in Australia.

#1 Rottnest Island is their home

One can spot small quokka communities around the south-east of Western Australia. However, they are densely populated in Rottnest Island. Take a quick ferry trip from Perth or Fremantle to reach this Island. There’s a high number of Quokkas in the settlement areas of the Island round the clock. This is because of the availability of food and water in this place. The island is home for around 10,000 of these furry ‘Rottos’. Whereas, the mainland has around 4000 of them.

When Dutch explorers visited the West Coast of Australia in the late 17th century, they spotted the Quokkas. Captain Willem de Vlamingh initially thought quokkas were giant rats. Which gave them the name ‘Rotte nest’ after the Dutch words for ‘rat nest’. The name ‘quokka’ comes from an indigenous word called ‘gwaga’, in the local Nyungar dialect.

#3 ‘The World’s happiest animals’ are here!

Australian Quokkas are not just the cutest animals in the country. It is also considered as the happiest animal in the world. These adorable animals are famous all over the world in social media as well. They are so friendly and love to approach human admirers.

#4 They smile to cool down their body

Australian Quokka is considered extra friendly and cute because of the cheeky grin on their faces. It looks like they say cheese for photographs. But there’s something else behind the smile. This feature helps them pant and cool off. This is a big plus for furry animals that belongs to an island that experience sunshine 12 months a year.

Quokkas has mastered the skill of surviving heat by sleeping in the shade during the days. Then they come out to play at night. So if you are hitting the road during the night, beware as these little ones roam around during this time.

#6 Quokkas are miniatures of Kangaroos

Quokkas don’t just look like scaled-down kangaroos. They actually belong to the same family. Kangaroos, Quokkas, Wallabies, Wallaroos, Pademelons and a few other species comprise the macropod family. These animals are a group of herbivorous pouched marsupials originated in the Australian continent.

It’s difficult to resist the urge to flick a quokka some crumbs of bread or a piece of cookie. But the quokkas are allergic to Human food and this can malnourish the little ones. A fine of 300 dollars is imposed if you get to feed a quokka. It is also illegal to handle quokkas. Any cruelty against this animal carries a heavy penalty of 50,000 dollars fine and a 5-year prison sentence. There’s no need for you to get closer to them. These gumdrops are so friendly that they will come up to you

This cute buddy never fails to impress everyone with his smile. One such classic example is The Swiss tennis maestro Roger Federer’s #quokkaselfie. He posted a picture with a quokka during his tournament in Perth. Many Hollywood stars including Margot Robbie, Hugh Jackman, Tash Oakley and Teri Hatcher have fallen for the Rotto Charm.

Fall in love all over again with these loveable kids of Australia. You will never feel like bidding goodbye to Australian Quokka for they are too cute to leave. Head to the Pickyourtrail website and start planning your trip to Australia. You can also customise your very own itineraries based upon your liking. Start Planning and Have a great vacation!

Best Places to Visit During Your Trip to Western Australia

Most Popular Things To Do in The Blue Mountains

Kangaroo Island – The ultimate guide that you always wanted for the trip.