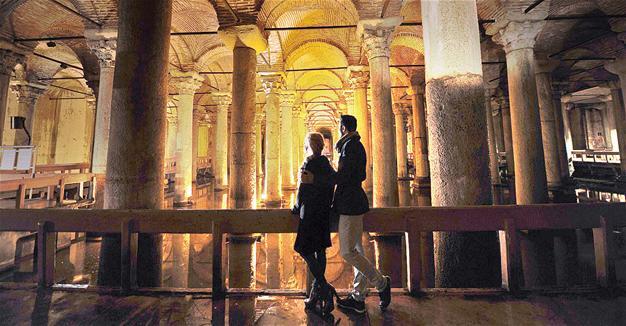 The Native people needed a tank to store and supply water and as a result, cisterns were built. These cisterns were made up of raw materials excavated in the nearby place. Istanbul is a place where one can find a number of cisterns. One of the most famous and largest cisterns is the Basilica Cistern. Due to these factors, it attracts more crowd and interest than the other cisterns.

History of the Cistern:

Emperor Justinian built the Basilica Cistern during his reign. The Basilica cistern that we see now is not what was built in the first place. Over the years, it had undergone several invasions and damages. It was rebuilt by every emperor that ruled the place, as the water was a basic need irrespective of the ruler. The columns are arranged in twelve rows of twenty-eight columns, each supporting intricate brick vaulting. Few names of the capitals are carved. The cistern was built upon a huge Basilica during the 3rd and 4th centuries, hence the name Basilica cistern was given.

It is believed that around 7000 labourers were required to build this magnificent cistern. One can even find a small quantity of water in here. Fishes still can be found as they keep the water in the cistern clean.

Once you walk to the back of the cistern, you will be able to find two Medusa heads supporting columns. One of the heads is placed on its side and the other placed upside down There is no specific reason for this The origin of the heads still remains a mystery.

The Basilica Cistern and James Bond

What if I say this marvel has been featured in a James Bond movie. Yes, you heard it right. In 1963, A James bond movie ‘ From Russia with love’ had featured this famous cistern. Where the hero had to sail through the columns to reach a secret door. Though this is a very short scene, it’s worth mentioning the big names related to this, so that it becomes your obvious choice while planning for the next vacation.

Click here to watch the clip from the movie

Inferno, one of the bestselling novels was written by author Dan Brown in 2013. The cistern was featured in the climax of the novel.

To sum things up

This is one place which surely has so much to offer for a traveller who is interested in history and the progress of civilization. You’ll be amazed by the forward-looking minds that existed back then. What are you waiting for? Don’t miss adding this to your Turkey itinerary. We at Pickyourtrail help people with tailored itineraries based on your requirement. Check it out!