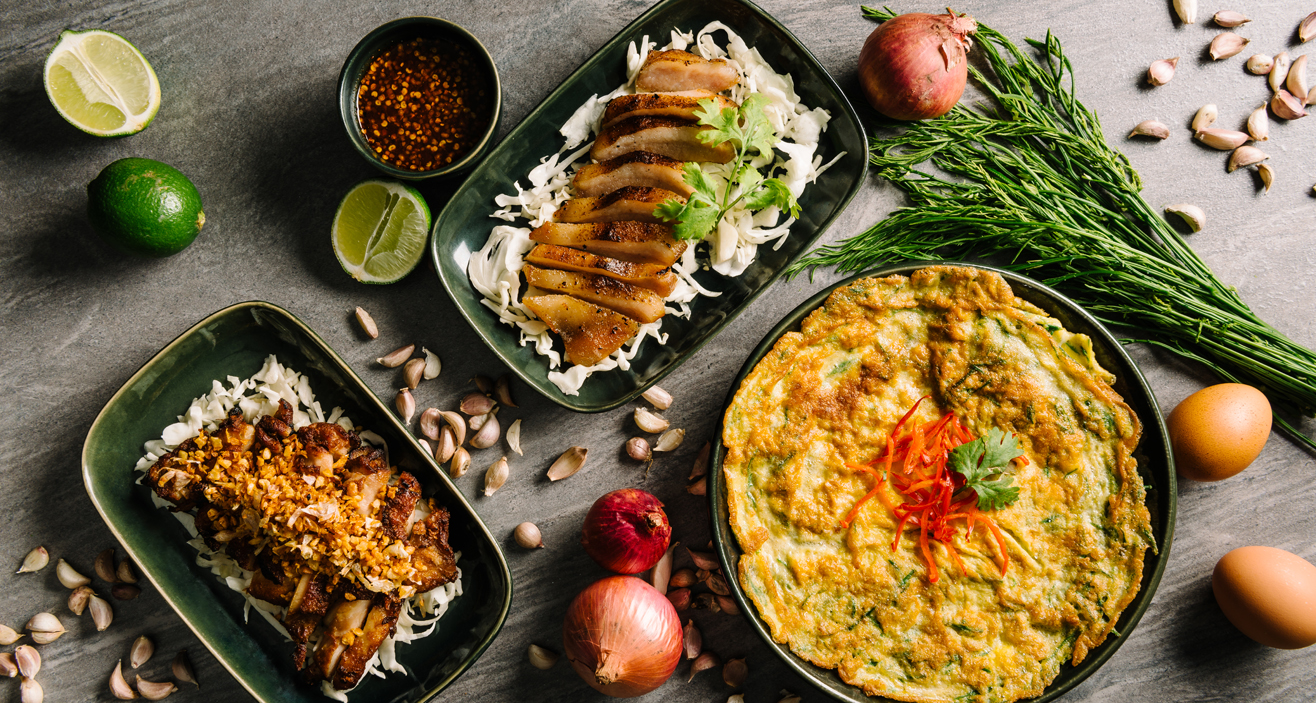 It is almost inexplicable to categorize Thai food under a certain dominant taste. Versatile and focused on flavours it is, almost always, hard to get the authenticity of this food right. From a list of several Thai wonders, here’s a pick of our favourites. Both street food and traditional Thai food make it to this list. Choose your favourites or better yet try them out all.

These appetizers are made of delicately fried shells. Typically filled with chicken, potato, corn, carrot and a tangy cream sauce, Krathong Tong may also be filled with Larb pork, green chicken curry, and kee mao squid. Among the Thai, a filling of a mix of canned tuna, lemongrass, shallot, kaffir lime leaves and fish sauce and a garnishing of chile peppers is a popular way of consuming Krathong Tong. Be warned though, a lot of restaurants try to pass off fried cheese triangles. Now, armed with some Thai cuisine knowledge, you know how to spot the authentic Krathong Tong.

Wrapped in the aromatic, vanilla-incensed pandan leaves, the chicken is marinated in soy sauce, sesame oil, and coriander roots. The leaves covering the chicken, when deep fried, impart a grassy and herbal flavour to the chicken. Also called Pandan Wrapped Chicken, the word Gai refers to the chicken while, hor means wrap, and bai-toey refers to pandan leaves. With the addition of lemongrass and coconut milk, the dish escalates to another level. The pandan or screwpine leaf, a common ingredient in South East Asian cooking, emits a sweet, grassy and floral fragrance. Known as the “vanilla of the East”, the pandan leaves are a widely used natural food colouring agent.

Gaeng Keaw Wan is Thai green curry that has received international fame and fanfare. It is an immaculate blend of green curry paste and coconut cream – the only Thai dish that is based on green chillies, instead of the usual dried Thai chilies. The coconut milk mellows the heat of the green chilies without compromising on the flavour. A spinoff on this dish is the Green curry chicken featuring chunks of tender chicken, eggplant, zucchini, and herbs. The explosion of tastes this dish produces is remarkable – from the coconut cream lending a sweetness, followed by a little heat from chilies and finally a salty after-taste from the fish sauce. This Gaeng Keaw Wan tastes best with jasmine rice or kanom jeen (round rice noodles).

A comfort food among the Thai, Lad Na has received the stature of being called a national dish. A Lad Na is essentially noodles in gravy (yum, amirite). But what sets it apart from the generic-run-of-the-mill noodles is that for Lad Na, wide rice noodles (noodles here are made of rice flour. This one’s winning the health card.) are fried until they come up nice and crispy (a little oil hurt nobody, okay!). A sauce then quickly prepared and poured atop the noodles – usually a combination of fish sauce, black soy sauce, and oyster sauce. Even the name Lad Na literally translates to – Pour on the face. The pouring is, of course, assumed to be in reference to the sauce. Lad Na is served with condiments on the side so you get to alter and tailor your Lad Na. The most common accompaniments are dry chili flakes, sugar, fish sauce and sliced hot chilies in white vinegar. Asparagus and broccoli often make it to the top of the dish. A mouth-watering mix of sauces over some crispy noodles garnished with condiments of your choice – it is no surprise the Thai find comfort in this dish.

A common street-food in Thailand and the rest of the world – where, unfortunately, it is poorly recreated – Pad Thai is essentially stir fried noodles with some great garnish. These soaked dried rice noodles are stir fried with eggs and firm tofu. Flavoured with fish sauce, tamarind pulp and palm sugar Pad Thai is garnished with dried shrimp, shallots, red chili pepper. Topped with lime wedges and roasted peanuts, this stand-alone dish has won many a heart. Fortunately for the vegetarians, this dish can be recreated.

Replacing fish sauce with soy sauce, eliminating the shrimp and adding vegetables like bean sprouts, coriander leaves, pickled radishes or turnips and raw banana flowers – you have now made this dish truly your own, veggies. Go ahead, celebrate. The Pad Thai must be of a reddish-brown tint and possess a fresh, complex, but, balanced flavour. None of the red, oily noodles the fakers are famed to create. Spot your authentic Pad Thai and as the French befittingly say – Bon Appetite!

Among the many divine curries that Thai cuisine is known for, Gaeng Mussaman stands out. Yes, our Southeast Asian counterpart shares something in common with us. Unlike the Indian curries, the Thai ones are more watery – being as they are, either based on water or coconut milk.

After mortar-pestle-ing or one of the more modern methods to grind, the massaman curry paste is fried with coconut cream. Added to this are meat, potatoes, onions, fish sauce, tamarind paste, sugar, coconut milk, and peanuts. Although chicken is most commonly used, duck, beef, mutton, goat and, rarely, pork are used too. A more traditional version of this employs oranges, orange juice, and pineapple juice. Rich and mild, this curry is usually eaten with rice or ajaat – a cucumber and onion salad.

Eaten as a part of a larger meal, Pla Rad Prik is a whole fish fried until crispy. A surprisingly simple dish to make, only a few ingredients are used. The fish, striped bass, and grouper are recommended most, is fried whole and then, topped with a traditional sweet, sour and spicy sauce – fresh red Thai chile peppers are highly recommended. Tilapia, cod, catfish, trout, and salmon are also commonly used to make Pla Rad Prik. The delicious sauce spread over the fish is commonly composed of garlic, palm sugar, and chilies. Pla Rad Prik is best eaten with curry, soup and, most often, rice.

Pad Kra Pra literally translates to holy basil stir-fry. Another one of the simple Thai dishes, the success of this dish depends entirely on the flavours. Purists, on one hand, claim that seasoning the meat – usually chicken – with oyster and soy sauce is not acceptable. That only fish sauce with a little bit of palm sugar would properly complement the meat. On the other hand, for the Thai street vendors, oyster and soy are the go-to sauces while making Pad Kra Prao. Served over warm jasmine rice, the icing – or well something like that – on the top is the crispy fried egg.

If *foodgasm* is the only coherent thought your mind is able to form after this list, you need help. You need to go on a Thailand trip. Right now. You have the serious case of food traveller bug. And we, the saviours that we are, are here to help.

Are you a foodie lost in Thailand? Let us help you with top food picks from Thailand. Explore the best of these cuisines and this destination with Pickyourtrail’s tailor made Thailand tour.

Best Rooftop Bars in Melbourne for an exciting time

Why should you visit Lumpini Park Bangkok