10 things to do in Salzburg for a sassy holiday 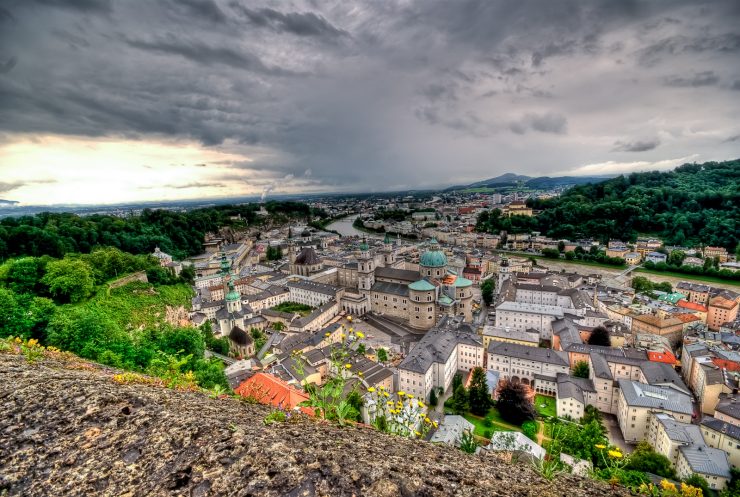 When you hear someone say Salzburg, the first thing that will come to our minds is Mozart. Yes, Salzburg is the birthplace of the ingenious Wolfgang Amadeus Mozart. But in some sense, the old town has been foreshadowed by the popularity of the composer and there is so much more to be explored. Dominated by castles, churches and palaces, here are the top things to do in Salzburg.

Soak in the culture of Vienna, Salzburg, and Innsbruck in this wonderful 9-day trip

1. Be enchanted by the views from Hohensalzburg Castle

Sitting atop a small hill called Festungsberg, Hohensalzburg Castle is one of the largest medieval castles in the world. While the primary reason for the construction was to protect the Prince-Archbishops of Salzburg, the castle has also played different roles over the years. From being used as a storage depot to a dungeon to prison, the imposing monument has seen it all.

Take an audio tour of the castle, soak in the enchanting views of the historic district, wander around the princely medieval chambers that’s filled with exciting things from the past, take a look inside the Marionette museum & the Museum of the Rainer Regiment and complete your visit with a coffee.

Given that the castle has a concert hall, it is also the venue for most of the city’s events.

Interesting read: Virtual tour of fairytale land: 10 best things to do in Austria

2. Enjoy the splash of water at Hellbrunn Palace

Hellbrunn Palace is a baroque villa that was established 400 years ago as a pleasure palace. Not just was this a place of residence, it was also the destination for celebration and unlimited fun. Access to the Hellbrunn Mountain water was an added advantage. The trick fountains set at different spots in Hellbrunn Palace are a major surprise to the visitors.

Go for a stroll across the lush grounds of the palace, discover the trick fountains along the way & take a dip, it’s so refreshing; pose for a dozen pictures with the palace as the backdrop, sit by one of the many benches just taking in the views, and grab a quick snack in the quaint cafe inside.

While Hellbrunn Palace is open all year round, the best time to visit is between April and October when the park grounds are open.

3. Go on an interesting journey to Mozart’s birthplace

Yes, you would have guessed what this place is all about. Built in the 12th century, Mozart’s birthplace is now a museum which introduces you to the early life of the genius composer. As you learn about Mozart’s early instruments, his friends and his immense interest in music, you will be teleported to a place far back in time.

The first floor carries period furniture from Mozart’s time; the second floor is devoted to Mozart’s interest in opera which also showcases the clavichord on which he composed The Magic Flute; the third floor is where you will find Mozart’s violin, his early editions of music, portraits, documents and family letters.

Mozart’s birthplace is a must visit in Salzburg – especially if you are a music lover.

Interesting read: Best restaurants in Austria for a drool-worthy experience

4. Book your stay at the fascinating Schloss Leopoldskron

Originally a rococo palace and a national historic monument, Schloss Leopoldskron is now a privately owned hotel. Built in 1736, the hotel is set on a seven-hectare lakeside garden that features an idyllic lake, manicured grounds, unparalleled views of the mountains & Hohensalzburg castle.

Get cosy in the vibrant historic suites and rooms that sparkle with glory, take a stroll across Schloss park, lose yourselves in the spellbinding sight of the mountains & the serene lake and savour every bit of the delicious Austrian cuisine.

To stay in one of the 12 suites in the palace, book at the earliest. Schloss Leopoldskron is also a great place for weddings.

Interesting read: Best hotels in Austria for a sensational stay

5. Wander around the filmy Mirabell Palace

A part of UNESCO world heritage site, Mirabell Palace is a historic building and an A-list cultural heritage monument in Salzburg. Built as a pleasure palace, Mirabell Palace was initially referred to as Altenau Castle. Today Mirabell Palace is home to an array of municipal offices including that of the mayor’s. And the marble hall in the palace is also regularly used for weddings, award ceremonies, conferences and concerts.

Identify the spots where the movie Sound of music was filmed, bask in the glory of Mirabell garden relishing the sight of the flowers, fountains & the exotic views, and click pictures of the intriguing sculptures in the Dwarf Garden.

Mirabell Palace looks exotic in winter and if you are visiting the site during the time of a festival, you will be blown away by the traditional Austrian clothing on display.

Owned by Red Bull founder Dietrich Mateschitz, Hangar-7 is a unique building in Innsbruck that houses a fleet of historical Flying Bulls aircraft, Formula 1 cars and contemporary artwork. The avant-garde structure – which looks like it is ripped off from a sci-fi movie – sets the pace for the marvel inside.

Take a guided tour of Hangar-7 which is an interesting combination of horsepower, art and architecture; interact with like-minded art aficionados, dive deep into the technology, dine at the Michelin starred restaurant of Ikarus that will keep you occupied forever with its world-class cuisine.

One more amazing fact about Hangar-7 is that even the toilet signs inside are interesting.

Interesting read: 8 exciting things to do in the picturesque city of Innsbruck

7. Go on a picnic with your family to Salzburg Zoo

In Salzburg with family and kids? What’s a better place to spend time than in Salzburg Zoo! Situated on the south side of the city, Salzburg Zoo also known as Tiergarten Hellbrunn is spread across 14 hectares. And the huge space of land serves as a habitat for a wide range of animals – 140 species and 1200 animals, in total.

Few of the interesting species inside Salzburg Zoo include the white rhino, alpine ibex, red panda, brown bear, sloth, snow leopard and pygmy mice. There’s also a restaurant inside from where you can say ‘hi’ to the animals while munching on the food. If you have the Salzburg card, the visit to the zoo is free for you.

For a special experience, visit the night zoo which is open during the month of April and September on Fridays and Saturdays.

8. Be in harmony with nature and science at House of nature

House of nature is an interactive science and natural history museum in Salzburg. While this sounds very interesting, it actually doesn’t do justice to what House of nature really is. From prehistoric dinosaurs and space experience to interaction with the underwater world and exploration of the human body, House of nature is where the old & the new worlds collide.

Wander around discovering the marvels of Mother Nature, peek into the endless universe for insights on space travel, gaze at the aquariums filled with colourful corals & fascinating landscapes, understand more about the human body and get close to varied exhibits on display.

The ideal way to explore House of nature is on a guided tour – which is available on prior reservation. There is also a restaurant and a souvenir shop inside the museum.

9. Lose yourselves in the magical sound of organ at Salzburg Cathedral

Yes, there are a lot of attractions to check out in Salzburg. But the time spent inside the quarters of a cathedral is always special and so is visiting Salzburg Cathedral. Founded in 774, the cathedral has been rebuilt over & over again because of frequent fire incidents. Still, it carries that sacred vibes it started out with.

Get lost in this Salzburg’s masterpiece which stands right at the centre of the city, admire the lovely paintings on the walls & the dome, lose yourselves to the magical sound of the organ, take a tour of the crypt, and be sure to check out the baptismal font in which the influential composer Mozart and Austrian priest Joseph Mohr were christened.

Free tours of Salzburg Cathedral are offered during festival time.

10. Explore every bit of the busy shopping street of Getreidegasse

Every city deserves to be explored to the fullest and one way to do that is to go shopping in all corners of the city. One such wonderful shopping street you shouldn’t miss out in Salzburg is Getreidegasse. Characterized by closely-knit houses, international fashion stops and traditional inns, Getreidegasse is always buzzing with people and is a historic shopping street in Salzburg.

Stroll across the pedestrian-only street that blossoms with people from different origins, stare at the wrought-iron shop signs which add to the old world charm, shop for souvenirs to gift your loved ones, and grab a dinner at one of the many quaint restaurants.

When you are in Getreideggase, do make it a rule to pass through the most frequented Schatz Haus passageway that leads from Getreideg No. 3 to University Square. This is a major highlight.

Didn’t know that Salzburg had so much to offer and thrilled to try this out on your visit? Send us a postcard and we will take care of all the planning.

These Scintillating Places To Visit In Pushkar are a must visit

Austrian delight: Top things to do in Innsbruck for that perfect vacation.

These Places To Visit In Tripura are a must inclusion.

Top 10 cities in India that you must visit