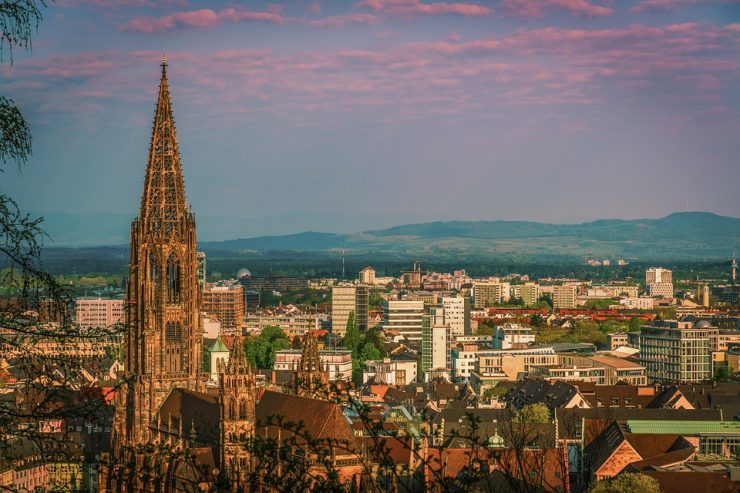 Located on the edge of the Black Forest, Freiburg is surrounded by Vineyards in Baden-Württemberg area. This Medieval university city is one of Germany’s most livable cities. The green movement was born here in the 1970s. One of the most sustainable cities in the world, Freiburg is currently a stronghold for the Green party. You can access the cable-car from the south of the city to the top of Schauinsland mountain. The city of Freiburg is also a starting point for the Black Forest. We have listed some of the top things to do in Frieburg

Let’s have a detail look at some of the top things to do in Frieburg during your Germany vacation.

This Gothic marvel is surely one of the first things you will have to see after you reach Freiburg. You will be amazed by architecture that you will want to view this spectacular tower from every possible angle. This building was started in the 13th century as a Romanesque church and it took around 300 years to complete. The Swiss historian, Jacob Burckhardt in 1860s said that the tower which stands at 116-meters is the most beautiful in the world, and many will agree to it as the years come by. The tower is hollow and it heavily ornamented. This was the highest tower in the world for the first three years post-completion. On the front face is a breathtaking 418 stone figured sculpted at the end of the 1200s. After you enter, you will see Hans Baldung Grien’s altarpiece from the Renaissance period. There is also a flight of stairs to reach the viewing platform at 70 meters.

Around the minister is a pedestrian path that is made up of cobblestone and enclosed by historic monuments. You will also find the daily market set up in this space on all days except Sundays. The bombs of 1944 almost destroyed the square. The path along with the minister and the Wentzingerhaus building at the southern part of the square was able to come through intact. Built around 1760 by architect, painter and sculptor Johann Christian Wentzinge, this Baroque mansion is now a small museum that talks about the city. You will find more than 150 stalls in the market selling things ranging from regional produce to handicrafts and even exotic spices. You will also find lines of snack bars that sell freshly book food, an example is the Freiburg style wurst in a toasted bun.

This majestic Renaissance building can be found in the southern part of Münsterplatz. This is constructed as a market storehouse. You will find the hall with its front painted in red and the windows having glazed patterned tiles. The building can be traced back to the beginning of the 1530s. The four statues represent three Holy Roman Emperors and one Prince – Maximilian I, Charles V and Ferdinand I, as well as Philip I of Castile, son of Maximilian I. You will also find under the window the coats of arm of the five dominions which are under the control of the House of Habsburg. These coat of arms and the five statues were created by Hans Sixt von Staufen, the Renaissance artist

You will find these little waterways in many grooves across various streets in the Old Town. Called the Bächle, the source is the Dreisam river. The earliest recordings of Bächle states that it was used initially to fight fires, provide travelling traders with water and sometimes open sewers as well. Out of the total stretch of 15 kilometres, around 6 kilometres of Bächle is underground. These tiny streams of water help to keep things cool in summer. Local legend says that if one accidentally steps into one of the Bächle, the person will marry someone from the city of Freiburg

Initially a monastery, this has now been converted into a chic gallery for art from the Middle Ages to the Baroque period. Works from Lucas Cranach the Elder, Hans Baldung Grien, Matthias Grünewald also paintings from the Speyer Altarpiece by Master of the Housebook can be found in this gallery. A cluster of Medieval wooden sculptures is displayed on the upper floor and on the first two floors you will find Original Medieval stained glass taken from the Freiburg Minster. On the ground floor, you will find Baroque figures, painting and statuettes. You will find grandly sculptured shapes arranged along the pillars in rows.

This is one of the two Medival gates you will find in Freiburg. Build around the 13th century, Schwabentor, you will find the oldest crossing on the Dreisam River. Built from red sandstone, Schwabentor is a three-storied building. Though built in the 13th century, few additions like the half-timbered extensions and the staircase tower were built around the 16th century. There is a painting of a merchant on the town side of the building. Many stories were built around this painting and the most popular one was that of a man who tried to buy the city of Freiburg with sacks of gold, but later upon opening it found only pebbles and sand. It was said that his wife has replaced them. On the city side of the arch, a little above the keystone, you will find a Boy with a Thorn engraved in Romanesque style. This can be traced back to Ancient Greece.

This 450-meter hill in the Black Forest stands as a protection for the city of Freiburg from enemies in the east. Many forts were built in Schlossberg around early 1000s owing to the vital location. Most of these structures have fallen down, but reconstruction works are in the cards. The latest addition is the funicular railway that you can use to go from the foot of the hill to the mountain top in three minutes tops. The Schlossbergturm was constructed around the early 2000s and offers a breathtaking view of the city

We are sure you are blown away by the amazing things you can do in Freiburg. Do reach out to our destination experts at Pickyourtrail to craft your dream vacation to Germany. Guten Tag!

Best Things to Do in Braunschweig: Germany at its best

Things to do in Stuttgart, Germany – Top 6 things to do

Things to do in Frankfurt, Germany – 8 fascinating things to do