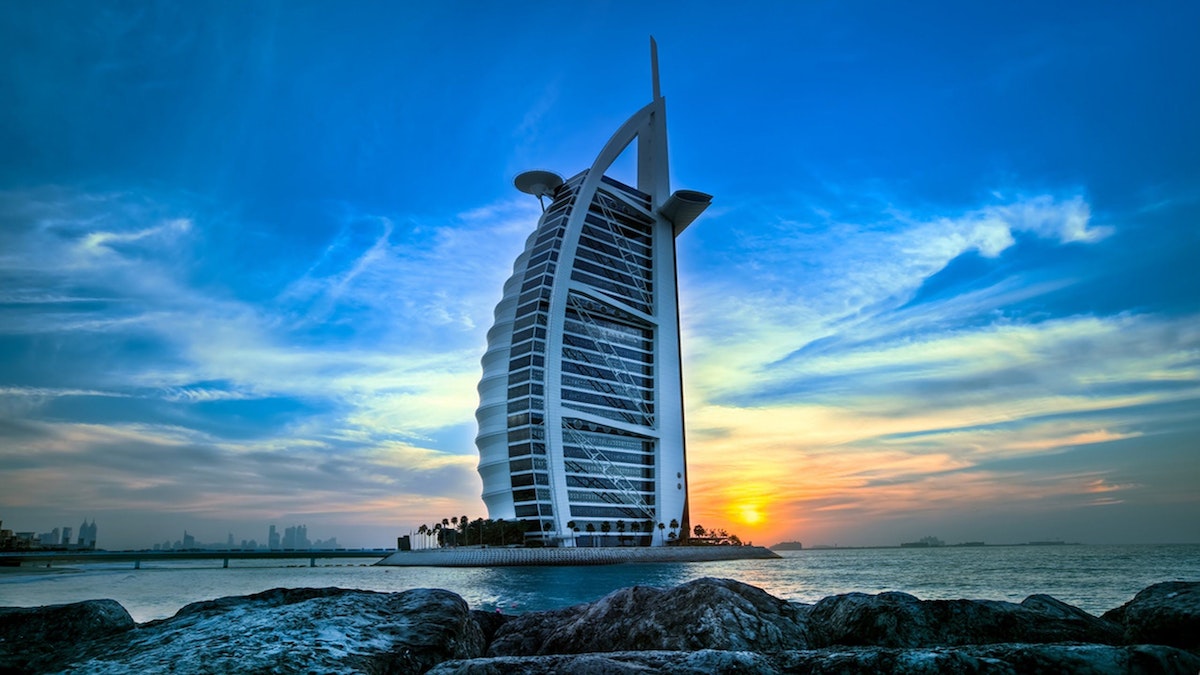 Burj Al Arab Dubai is located on a manmade island that is linked to the mainland by a private bridge. The unique sail-shaped silhouette is more than just a stunning hotel and is an icon of modern Dubai. This luxury hotel possesses the world’s largest fleet of Rolls Royces, exquisite dining, butler service, 24 karat gold iPods, and a rooftop helipad.

Burj Al Arab price for stay is all you are waiting to unlock this ultra level luxury. Staying in this luxury hotel or spending an evening here is not a pricey affair, but is worth every dollar for a luxurious experience.

Burj Al-Arab Dubai starts with an unforgettable experience and you can choose between the world’s largest chauffeur-driven Rolls Royce’s or by a private helicopter transfer service by luxury escapes or Arabian adventures.
Visitors arriving by helicopter can experience a 10 minutes birds-eye-view of the Dubai city, and finally landing on the hotel’s helipad on the 28th floor of the luxury hotel. It’s a memorable experience from the moment you enter your room. The butler assists unpacking your luggage and every request is granted, and every need is anticipated.

Burj Al Arab Jumeirah has only suite rooms, an overall 202 luxurious suites, offering travelers total privacy and luxury that every vacation deserves. The hotel also has a two-storey Deluxe One-Bedroom Suites of about 170 sqm with remote-controlled curtains that open to spectacular views of the Arabian Gulf. The suite has gadgets like iMac computer, media hub, free WiFi, widescreen TV and a master bathroom with a full-size Jacuzzi, rain shower and full-sized Hermès amenities. For a sound sleep, you get to choose from an option of 14 different pillows, Eiderdown duvets, exquisite Egyptian cotton linen, and an ultra-deluxe super king bed personalized according to your posture preferences. The hospitality of this luxury stay can be unparalleled. The hotel accommodates the world’s largest brigade of butlers who are available 24 hours, including exceptional personal service. The unique features of the hotel complexes a private reception on every floor, personalized private bars, and in-room dining. Some of the high-end rooms have attached libraries, snooker tables, and private elevators.

The hotel has nine signature restaurants and bars on-site, each emphasizing one of the best dining experiences in the world in their own way. You can be dining in the elegant atrium, or overlooking the skyline. Each restaurant has its unique cuisine including authentic Arabic cuisine options, far East Asian, and Modern European dishes. They have sourced ingredients from all around the world. Al Mahara by Nathan Outlaw is one of the restaurants and serves the best seafood in Dubai. The entire dining atmosphere is artful and houses a huge aquarium filled with more than 50 species of fish.

The hotel has private beach access, two swimming pools with private cabanas, a water park with free access for guests, and luxury car hire for guests like Ferrari and Lamborghini. There are various options for fitness clubs and spa facilities for guests. A private yacht charter service in the Arabian Gulf is available for the guests and you can also take a dedicated spa therapist along with you for a blissful experience. On the 18th floor, there is a Sinbad’s Kids Club and a Diwania Library that has professional carers. The Wild Wadi Waterpark also belongs to the Burj Al Arab and is one of the world’s most impressive waterparks, with slides and rides guaranteed to delight all age groups at heart.

Burj Al Arab is called the most luxurious hotel in the world for the kind of design and development it has made from the rest of the hotels around the world. Also known as the Arab sail, this building is about 321 metres high. This signature building was built with intent to welcome their travellers to Dubai and give a glimpse of what the city is without actually touring through the city. Perched on a dramatic artificial island, this huge building is solely stands on friction since the building is built on sand with 200 supporting columns that goes 45 metres below water. It took almost 3 years to build the island which is about 7.5 metres above the sea. The hybrid V shape structure ws finally a hit after many-many challenges and tests.

World records is not a new term when Dubai is considered. However, these are some of records Burj Al Arab has set for the rest of the world.

There are a few facts about the Burj Al Arab which is not that widely spoken about. Read through to excite your neurons.

Burj Al Arab is one of the most expensive hotels in the world. This hotel by itself is one of the most famous landmarks in Dubai. It gives you the best view of the city along with the best beach life and terrace activities. With lavish suites and gold interiors, this is one of the best 7 star hotels in the world. This tallest structure is a package of food and drinks, arts and culture, shopping, tourist attractions, spa and wellness, finest restaurants and much more. There are attractions such as Jumeirah beach, Wild Wadi Waterpark, Ski Dubai, Madinat Jumeirah, Mall of Emirates and much more to explore in the emirate city.

This most luxurious 7 star hotel measures about 321 metres above the sea level. This happens to be the tallest hotel in the world.

How to reach Burj Al Arab?

Burj Al Arab is around 280 meters from the shore in the Jumeirah beach of Palm Island. It is a 15-minute drive from Deira or Bur Dubai region by car or you can also take a metro to this luxury stay.

The best time to visit Dubai is between November and March. Those not looking to stay here can also visit this luxury place on all days between 12:00 pm to 6:00 pm.

Don’t miss staying in the world’s most luxurious hotel that no other destination owns to provide a memorable experience. Dubai has an experience that is seriously going to blow your mind, the Burj Al Arab Jumeirah is your fix. Visit PickYourTrail to book your trip to Dubai with us and have a memorable vacation!

1. How much is it per night in Burj Al Arab?

The Burj Al Arab is well known for its striking sail-shape plan, and the sumptuous suite, which is one of the most costly lodgings on the planet, has a normal sticker price of $24,000 per night

2. What is Burj Al Arab famous for?

Burj Al Arab is the encapsulation of extravagance, with a 180-meter chamber, an armada of white Rolls-Royce autos, moving wellsprings, and gold leaf thrown all through.

The Burj Al Arab in Dubai, one of the world's most adorned lavish lodgings, was recently delegated "best inn on the planet" by the Ultratravel Awards.

Travel writers and pundits have alluded to the Burj as "the world's initial seven-star lodging" and "the world's most lavish inn."

The Burj Al Arab has a normal sticker price of $24,000 per night

Yes it is. Actually it is termed the first 7 star hotel.

A dinner at the Burj Club with a visit to At The Top costs 83 dollars for each individual from the age of 12, and 76 dollars for youngsters between the ages of 4 and 12.

A typical At The Top ticket costs somewhere in the range of 35 and 40 dollars, in this way a dinner at the Burj Club is decently sensibly evaluated for Dubai guidelines and the area.

6. Is Burj Al Arab worth the money?

The Burj Al Arab, according to those who have stayed there or went for an assessment, is worth it, and why?Burj Al Arab is absolutely worth it if you're seeking to splurge for a super-special occasion or if you're a billionaire searching for a quick and easy location to stay.

7. Why is Burj Al Arab so special?

The Burj al Arab Hotel, which is currently the world's third tallest hotel, is considered to be the world's only 7-star hotel.

The hotel, which can accommodate 110 people and gives great panoramic views of Dubai and beyond, is supported by a full cantilever that stretches 27m from the side of the pole.

The hotel is the epitome of luxury, with a 180-meter atrium, a fleet of white Rolls-Royce automobiles, dancing fountains, and touches of gold throughout.

8. What's so good about the Burj Al Arab?

The Burj Al Arab is generally perceived as one of the world's most lavish inns.

It has 28 twofold story levels with 202 suites, three pools, nine eateries, a children's club, private ocean side, spa, and helipad, so you might be blessed to receive the seven-star standard it is known for.

9. Can anyone stay in Burj Al Arab

Non-paying visitors are not permitted to visit the Burj al Arab because it is a private resort. If you have a dining reservation at one of the restaurants, you can visit.

The freshwater pool features a hidden swim-up bar in the middle, creating the ideal environment for relaxing and socializing.

In our saltwater boundlessness pool, only adults are allowed.

The cost per person is AED 800, which includes a credit of AED 400 for food and beverages.

11. Why is the Burj Al Arab so expensive?

Burj Al Arab is the world's first seven-star hotel, with a 180-meter atrium, a fleet of executive cars, dancing fountains, and touches of gold everywhere.

Burj Al Arab broke the Guinness World Record for the most expensive drink, valued at 27,321 AED, in 2008, in addition to being the world's tallest all-suite hotel.In 2016, it also produced the world's largest tin of caviar, containing 17 kg of Empress caviar, the world's only fully-certified organic caviar from native-raised sturgeon.

12. Which is the largest hotel in the world?

With 584 rooms, the First World Hotel & Plaza is a great place to stay.

The First World Hotel is a three-tower hotel with 8,584 rooms.

Since 2015, it has held the Guinness World Record for the world's largest hotel by number of rooms.

Authoritatively, there is nothing of the sort as an 8 or 10-star lodging.Indeed, even a seven-star rating doesn't exist.

A columnist who saw the kickoff of the Burj Al Bedouin in Dubai accepted the ordinary five stars didn't do the debauchery equity instituted the term 7-star.

The Burj Al Arab is a lavish lodging in Dubai

14. How many billionaires are in Dubai?

According to a recent survey, millionaires account for about 1.22 percent of the UAE's population.

15. What is the dress code for Burj Al Arab?

Gentlemen are asked to wear a collared shirt, full-length pants or exquisite denim, and closed shoes,' according to the Burj Al Arab website (no trainers or sport shoes).

A suit or dress, a long or short skirt, or stylish slacks and top are necessary for the ladies.

You are welcome to wear UAE national clothing.'

16. How much is afternoon tea at the Burj Al Arab?

The Burj Al Arab evening tea is valued at 560AED (150USD) per individual and is served in seven courses.You get interminable espresso, tea, scones, finger sandwiches, cakes, and different treats.