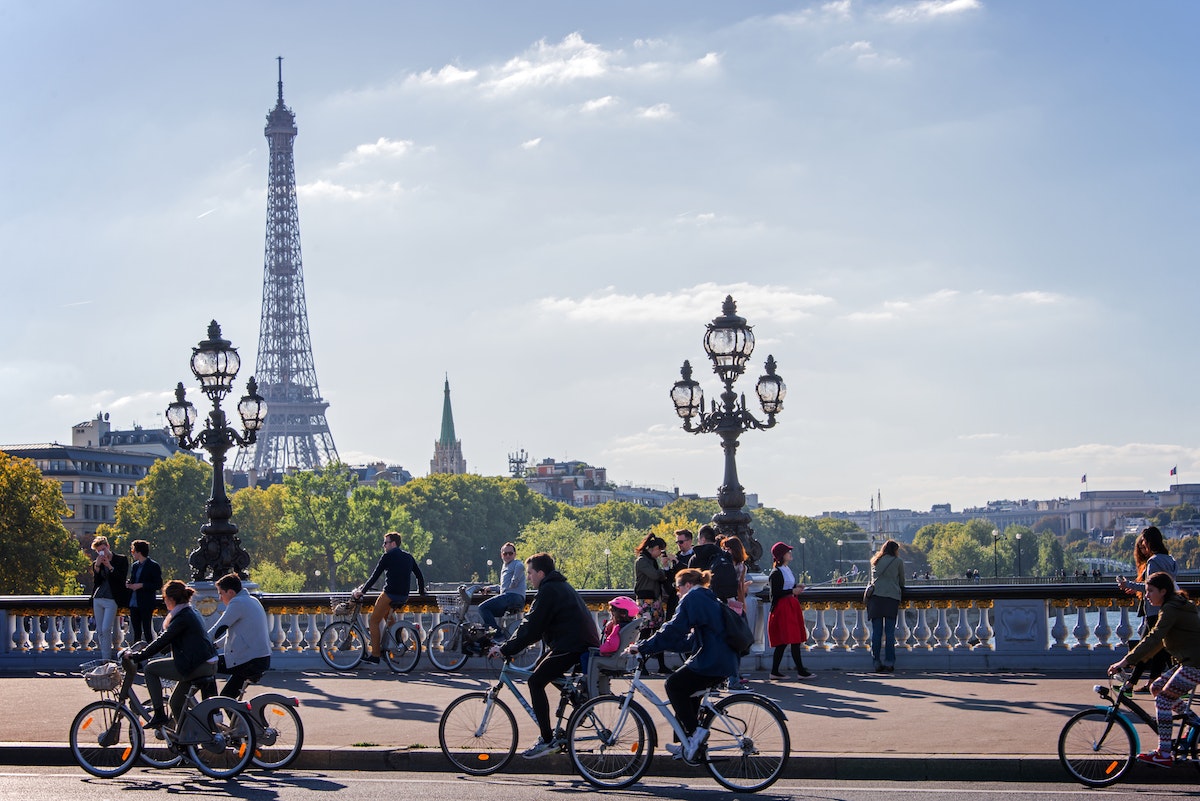 The romantic city of Tour de France can also be explored through pedals.
prices starts at

It is not a secret that Paris is a picturesque, wonderful city in Europe and is one of the most sought-after places in Europe tourism worldwide. The city is filled with all the factors and a blend of modern classics that make the city unique. Being the model city for having a reputation as the capital of fashion, great in gastronomy, owing to one of the best pastry and baking and abiding art. Being the inspiration for a thing is not a piece of news for this city and a new addition to the list is cycling. The romantic city of Tour de France can also be explored through pedals on wheels.

Cycling in Paris has gradually become more and more familiar in transportation in the past few years. With the investments in making Paris one of the top ‘Bicycle Friendly’ cities in the country, it is not so long before it achieves its goal. The city is also filled with more cycle lanes that help cyclists to move around the city freely and safely while riding.

Tourism in Paris has also embraced the sightseeing of the city through cycling. There are several bike rentals available around the city and it is easier for anyone to rent a bike and ride around the city. There are several kinds of bikes up for rental in Paris including mechanical, Tandem, e-bikes and mountain bikes are some available. It is easier to rent a bike for a tourist in Paris and ride the bike. Although there are no specific rules as to wearing a helmet while riding a bicycle, It is, however, a compulsory rule for children under 12 to wear one, while cycling in Paris.

Cycling tours are becoming more and more popular among tourists as this is one of the activities that can be done as a group and can become a bonding experience. The travellers can now take on short hours of bike tours that would last about 3-4 hours. The tour is available both day and night. The tour would be led by a guide and this tour will allow the tourists to merge with the culture and connect with the city on a more intimate level and help the person to explore the monuments like the Eiffel Tower and the Louvre Museum in a new light. This is, without a doubt, the best thing to do in Paris to know the city better.

The cycling tour majorly explores all the important monuments, gardens, cafes and restaurants. In short, everything best the city has to offer. This will be a short, yet memorable activity for anyone who takes on it. It is also easier to book a cycling tour and the option to reserve a tour is also available. And if you are not a first-timer to Paris, you can go on a solo adventure around this breathtaking city.

One can explore the entire city, from the city’s famous monuments to the structured canals, from classic Paris locations to the off-beat tracks, everything can be covered through this journey. This is one of the great to-do activities in Paris.

Cycling has become one of the adventure activities in Paris and it gives one the grounded, nostalgic feeling of being surrounded by the beautiful ambience and just riding through the city with wind and peace. Give this ride a try and you will find something new at the end of it. So get, set and Bike!

Q.Is it safe to go cycling in Paris?

Yes. For the past few years, cycling has been made easier and safer with the routes, specifically dedicated to cycles and car-free districts are introduced for safe travel.

Q.Is wearing a helmet compulsory while cycling in Paris?

Q.Can one rent a cycle in Paris?

Yes. It is easier to rent a bicycle in Paris through the hire system called Vélib' that offers both mechanical (green) and electrical (blue) bikes for rent. This network is most popular in Paris.

It is safe to say that cycling is one of the most common modes of transportation seen in Paris.

Q.Can I explore Paris through a bicycle?

It is a great way to explore the city and to visit the places in Paris. You will experience the city with a new perspective and have fun while doing it.

Q. Is it easy to cycle in Paris?

Due to the constant addition of more and more bicycle lanes, cycling becomes an easier and safer mode of transportation in Paris.

Yes. Tourists can use Vélib' in Paris for renting bikes (bicycles).

Q.Is it hard for tourists to rent a bicycle in Vélib'?

The process of renting a bicycle is relatively easier. It is a simple 4-step process of buying a ticket, creating a pin, paying for deposit and receiving the receipt.

Fabulous 6N to Paris with Cycling