Home » Top Holiday Destinations » Australia Travel Blog » 10 things to do in Ballarat, Australia in 2021 with your family!

10 things to do in Ballarat, Australia in 2021 with your family! 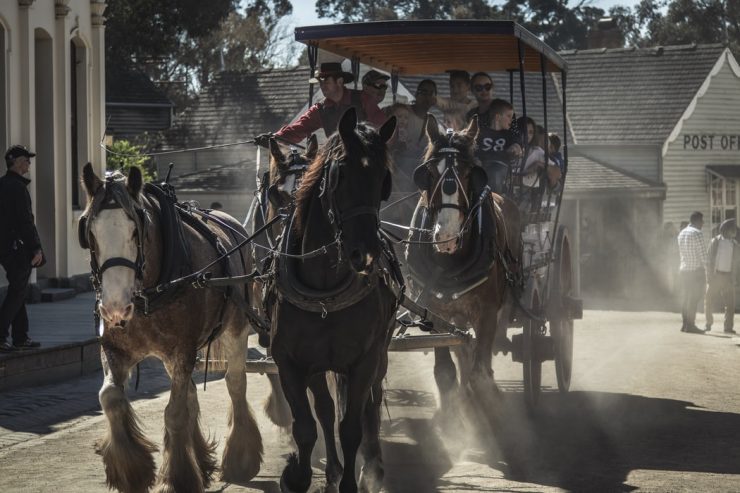 The story of Australia’s third-largest inland city is trapped in the Victorian gold rush of the mid-19th century. Gold was first found in the area in 1851. This eventually triggered a rage that would burn for many decades due to the sheer wealth of the alluvial deposits. The money created by the gold rush is hard to avoid. It was clearly visible in the grandeur of the hotels, venues and government buildings on Lydiard Street. Sovereign Hill, the focal point of the gold rush, is now a first-class outdoor museum. And Ballarat’s Victorian amenities, like an art gallery, botanical garden and tramway, are all preserved for new generations. Below are the top 10 things to do in Ballarat.

10 things to do in Ballarat

Listing down the top 10 things to do in Ballarat for your easy reference.

At Sovereign Hill, you will be on ground zero for the most valuable alluvial gold rush in the world. The Welcome Nugget, the largest gold nugget ever recovered, was discovered at this very place and weighed almost 70 kilograms. This 25-hectare site is presently an outdoor museum. You can return to the fast-moving first ten years of Ballarat’s European history. Sovereign Hill has more than 60 replica historic buildings, from a coachbuilder’s workshop to a blacksmith’s forge. A cast of costumed re-enactors are ready to take you back to the Victorian Goldrush. They will fill you in with interesting facts and figures about the Sovereign Hill. No wonder this tops the list of 10 must-see places to visit in Ballarat.

Covering over 238 acres and mostly shallow, the lake has been modified for water sports down the years. Usually, famed for hosting the rowing and canoeing events for the 1956 Melbourne Olympics, the islands and reedbeds are an important habitat for waterbirds. You will be able to see around 166 different species here. This lake comes second in the list of 10 things to do in Ballarat.

In almost 40 hectares of picturesque bushland, Ballarat Wildlife Park prides itself on its interactivity. You can see nearly all of the animals being native to Australia. This includes counting wombats, koalas, echidnas, quokkas, little penguins and saltwater and freshwater crocodiles. At some point, you will also cross paths with one of the free-roaming kangaroos and these can be fed by hand. Among the exotic animals at the park, you will also get to see Aldabra giant tortoise, meerkats and a pair of Sumatran tigers.

Also read: What to Know Before You Visit Melbourne Zoo

Ballarat Botanical Gardens has been around since the middle of the 19th century. This spreads over 40 hectares and features a “gardenesque” Victorian pleasure garden wedged. The Botanical Gardens are enhanced with a host of monuments, like a set of late 19th-century Italian sculptures. People loving nature, please do include this in your top 10 things to do in Ballarat.

In-store at the oldest local art museum in the country is a complete survey of Australian fine art. People can see all the periods, from colonial to contemporary. Starting in the late 19th century, you can see the works by Jane Sutherland, Louis Buvelot, Tom Roberts, Arthur Streeton, Rupert Bunny and Walter Withers. Some of the major 20th-century artists are represented at the Art Gallery of Ballarat is Sidney Nolan, Fred Williams, Arthur Boyd and William Dobel. There will be up to four temporary exhibits happening when you visit, and the gallery is the owner of the historic Eureka Flag, which has been lent to the Eureka Centre (more below).

Until 1971, the easiest way to get around Ballarat was by tram. People used horses at first to pull the tram and then electrified it in 1905. The Ballarat Tramway Museum has a long listing of vintage trams, generally, from the early 20th century, some built for this system and others brought here from Melbourne. Most remarkable is Tram No 1. You can also visit the depot to examine the fleet and a trove of tram memorabilia before climbing aboard for a 20-minute ride through the Botanical Gardens.

The lavish wealth from the Goldrush is manifested in the grand and eclectic architecture flanking this street from the railway station down to the SMB Campus of Federation University Australia. On this stretch of Lydiard Street there’s a preserved 19th-century townscape, and several of the buildings have beautiful iron verandas with intricate columns and balustrades. As well as the Art Gallery of Ballarat, look for the Mining Exchange (1887-89), The George Hotel (1854), Her Majesty’s Theatre (1875), Ballarat Town Hall (1870), Craig’s Hotel (1865) and the Provincial Hotel (1909), to name a small few. Amidst the solemn architecture, Lydiard Street has bars, restaurants and other cultural honeypots like the Post Office Gallery and the Regent Multiplex, in a 1930s Art Deco building.

A landmark in Australian history and democracy, the Eureka Rebellion was conducted by miners against the colonial authorities in 1854 during the Victoria Goldrush. The expense of a miner’s licence and taxation on mining by colonial powers without prior information caused a few errors. But there was much sympathy for the captured rebels that an act was passed granting suffrage for male colonists in the lower house of the Victorian Parliament. There are also interactive displays explaining the rebellion’s causes and repercussions, and the showpiece is the original Eureka Flag, flown by the rebels.

Arch of Victory is the largest memorial arch in Australia. The arch of Victory honours those who served in the Great War, and honours the Allied Victory. It stands 16.5 metres tall and 19.2 metres wide and was later renovated to mark the Second World War, the Korean War and the Vietnam War. The initial structure was funded by the female workers hired during the First World War at Eleanor Lucas’s Lingerie Factory. It was opened by Edward, Prince of Wales (future Edward VIII). The arch declares the start of the Avenue of Honour, planting with almost 4,000 trees from 11 different species. History lovers need to visit this place and know of it from the list of 10 things to do in Ballarat.

Last in the list of 10 things to do in Ballarat is The Gold Museum. Part of Sovereign Hill, the Gold Museum is just north of the outdoor museum and takes you farther into the Ballarat region’s gold heritage and cultural history. The permanent exhibition, Ballarat: Inspired by Gold gives a glimpse of the city from prehistory through colonial agriculture and the discovery of gold in 1851. Furthermore, the museum has a huge collection of gold artefacts, including antique jewellery, giftware and coins. It also has a host of other items like carriages, clothes and mining tools to paint a picture of Ballarat’s sudden growth.

We hope you found this list of top 10 things to do in Ballarat helpful. Your trip to Australia with Pickyourtrail will be an experience worth undergoing. Also, do not forget to indulge yourself totally in the history and culture of this city. Leave a Whatsapp inquiry for more options! You can also download our best travel app below.