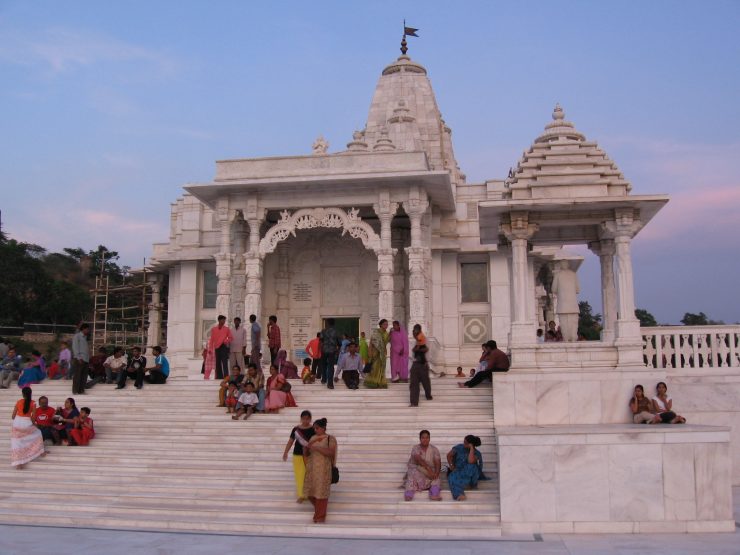 Birla Mandir, Jaipur is a Hindu temple in Jaipur, India, and it is one of many Birla mandirs. It was constructed by the B.M. Birla Foundation was built in 1988 and is made of white marble only. Jaipur is the capital of the Rajasthan state of India. It is known as the Pink city of India. The opulent, collonaded City Palace complex stands at the centre of its stately street grid (notable in India). Part of it is still a royal residence, with gardens, courtyards and museums.

It is dedicated to the Hindu Goddess Lakshmi and Lord Vishnu (Narayan), whose images appear inside, together with other Hindu gods and goddesses and the Gita and Upanishad selections. The temple holds festivals such as Diwali and Janamashtami. The temple is open daily It is located near Moti Dungari hill in the Tilak Nagar neighbourhood of Jaipur.

Birla Mandir was originally known as Laxmi Narayan Mandir and is located at the base of Moti Dungri Temple, Jaipur. This temple is a popular place of pilgrimage among Hindu devotees. The structure is made of sparkling white marble and looks incredibly wonderful.

Lush green gardens surround the temple on the sides and give a really dreamy touch to the structure. Birla Mandir possesses a total of three domes, each representing a different religious perspective. The temple all around its body features stunning carvings and drawings. The structure’s walls are embellished with mythological quotes and holy charms from Geeta ‘s Hindu holy book. On the interior walls of the shrine are also carved various mythological events and happenings. The architectural beauty of the temple is altogether admirable and appreciable. The most significant part of Birla Mandir is Lakshmi Narayan ‘s beautiful monolithic figurine. The temple also houses a Shri Ganesha idol which is equally impressive and appreciable. The temple even shelters images of legendary figures like Zarathustra, Jesus Christ, Gautam Buddha, Confucius, and Socrates. Birla Mandir is also home to a beautiful museum which stores and displays all of the respected Birla family’s ancestral assets.

According to popular historical belief, Birla Mandir at Jaipur in Rajasthan is built on the land handed over by the respected Maharaja of that time to the reputed Birla family of the country in exchange for only INR 1. The temple construction started back in 1977 by the B.M. Industrial Stiftung. The structure was developed over a total period of approximately 8 years. Mahatma Gandhi was invited to inaugurate Birla Mandir, with reference to historical facts. Gandhi stated, however, that he would accept the invitation only if the temple were open to devotees of all social castes. The consecration ceremony of the temple finally took place on 22nd February 1985.

The city ‘s international airports are located 15 kilometres away from Temple Birla. Upon reaching the airport, tourists can easily take a bus or a taxi to finally arrive at Birla Temple.

In Jaipur, the Birla Temple looks beautiful and appealing all year round. That being said, during Diwali and Janmashtami the most ideal time to go to Birla Mandir is. During these Indian festivals, the temple gains a huge number of devotees. Tourists also prefer to visit the temple during the winter months, since it is considered to be the best time to visit Jaipur city. Visiting Birla Mandir during sunset is recommended when faint lights falling on the white marble shrine make the whole temple shine and look absolutely soulful.

Moti Dungri Temple is dedicated to Lord Ganesha, at a distance of just one kilometre from Birla Mandir. Counting among the largest Ganesh mandirs in Jaipur city, this temple is frequently visited by spiritual seekers, lovers of God, seekers of experience, and newlyweds. Moti Dungri Temple is open to visitors throughout the week, from 4.30 AM to 9.15 PM.

Located at a distance of about 4.7 kilometres from Birla Mandir, one of the country’s major tourist destinations is Hawa Mahal. This beehive-like 5-storeyed building is built of pink and red sandstone. This monument’s name is inspired by the unique fact that it continually receives a soothing breeze. Hawa Mahal is open from 9 AM till 4.30 PM,

The beautiful and charming Jal Mahal, located at a distance of approx. 8.5 kilometres from Birla Mandir, is a truly surreal palace built in the centre of Man Sagar Lake. It was built for being used as a rest house for his favourite duck hunting events by Maharaja Madho Singh I. This water palace contains a total of 5 floors, four of which remain underwater. The lush green, aromatic terrace garden, known as Chameli Bagh, is one of the Palace’s major attractions. Although it is not permitted to enter Jal Mahal, historical buffs, photo fanatics, and experience seekers never miss a glimpse of the palace ‘s exterior beauty.

Located 1 kilometre from Birla Mandir, Dungri Fort happens to be a very small palace designed in the same fashion as the Scottish castles. In the bygone times, the fort was occupied by Maharaja Madho Singh ‘s son.

Jaipur Birla Temple is famous for its fine carvings and delicate work. The three different approaches to religion are depicted in the temple ‘s three colossal domes. To the benefit, having the help of a reputed travel agency adds. Pickyourtrail guarantees smooth and trouble-free journeys. For all your travel needs it’s a single stop. Voyagers can customize their itineraries and can book everything completely online at a competitive price. To find out more, log on to www.pickyourtrail.com.

A Trip to Unbelievable Udaipur – 4 nights and 5 days