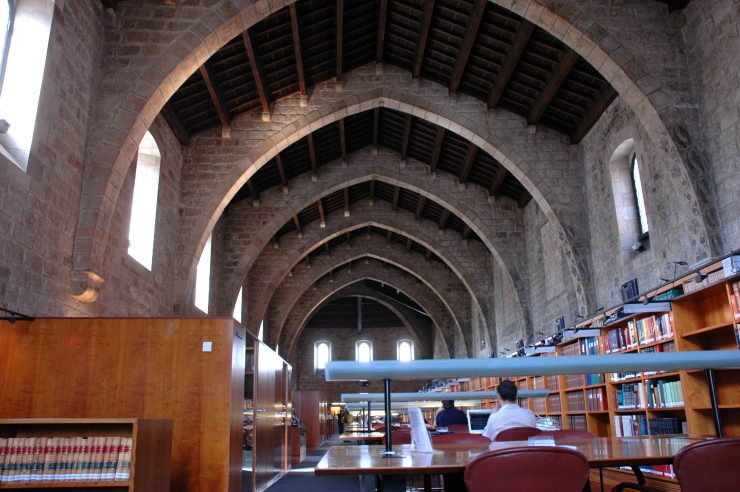 Barcelona is a coastal city in northeastern Spain. When everyone remembers the famous Gaudi’s work or FC Barcelona football club one always forgets Barcelona is also the city of literature since time immemorial. Barcelona was announced the seventeenth city of literature by UNESCO which gave provincial Barcelona literature lovers amplified energy. From old book libraries to street book markets, Barcelona, The Literature paradise scene is booming and flourishing than ever.

The library of Catalonia: Barcelona, The Literature paradise

Catalan national library, the library of Catalonia is located in Barcelona, Catalonia, Spain. The mission of the Library of Catalonia is to gather, safeguard, and fan out the Catalan bibliographic production and that related to the Catalan linguistic area, to look after its protection and preservation, and to unfurl its bibliographic heritage while continuing to keep up the status of a center for research work and consultation.

Cafe Els Quatre Gats a cafe in Barcelona, became a popular meeting spot for the famous artists of the period, day in and out throughout the modernist period, Modernisme in Catalonia. The cafe was put to use from June 12, 1897, in the well-known Casa Marti building, and served as a hostel, bar, and cabaret until it fell to use as the main meet up point for Barcelona’s most important modernist figures, such as Pablo Picasso, Antoni Gaudi, and Ramon Casas I Carbo.

The 23rd of April, 1995 was declared as World Book and Copyright Day by UNESCO. This was to acknowledge that the book has historically provided maximum to the spread of knowledge. The steep increase in the productivity of the books is a cultural enrichment all through the world. In 1926 Spain announced the 23rd of April as book day, honoring the death anniversary of Miguel de Cervantes, the most famous Spanish writer. The day of Sant Jordi or Saint George is observed by tradition as the day of giving away roses as a symbol of love. The tradition dates back to the 15th century, even though the exact date is not known.

You’d walk past LA Central Bookstore thinking it was just another bookstore, but inside there’s a quite beautiful coffee shop, with a very homey-feeling terrace garden. If you’re looking for a way to escape the busy Barcelona scene for a coffee, then there isn’t the best option other than La Central Bookstore. LA Central bookshops in Barcelona are Spanish but have a small portion dedicated to the vast selection of best books English books and books in other languages. LA Central is generally considered as Barcelona’s best bookstore.

The sector of literature in Barcelona maintains its international dynamism till today through the organization of a wide array of international book fairs including Liber, which is the foremost important Spanish language book fair in Europe with an exceptional focus on digital content. Pickyourtrail will guide you with the Barcelona Travel guide and also helps to choose the right Barcelona Package and enjoy the essence of the city along with Spain Package or Europe Package without any fuss.

Madrid Summer: Beat the heat in the Capital

Best Beaches In Santander – Welcome To The Beach Destination

Top 5 Bars In Casco Viejo – It’s Time For A Drink!

Best Museums you should see in Mallorca

Best Things to Do in Fuengirola

Top Beaches in the Canary Islands

A Day in Paradise: Day Trip to La Graciosa

10 Amazing Things to Do in Granada in Spain Vacation