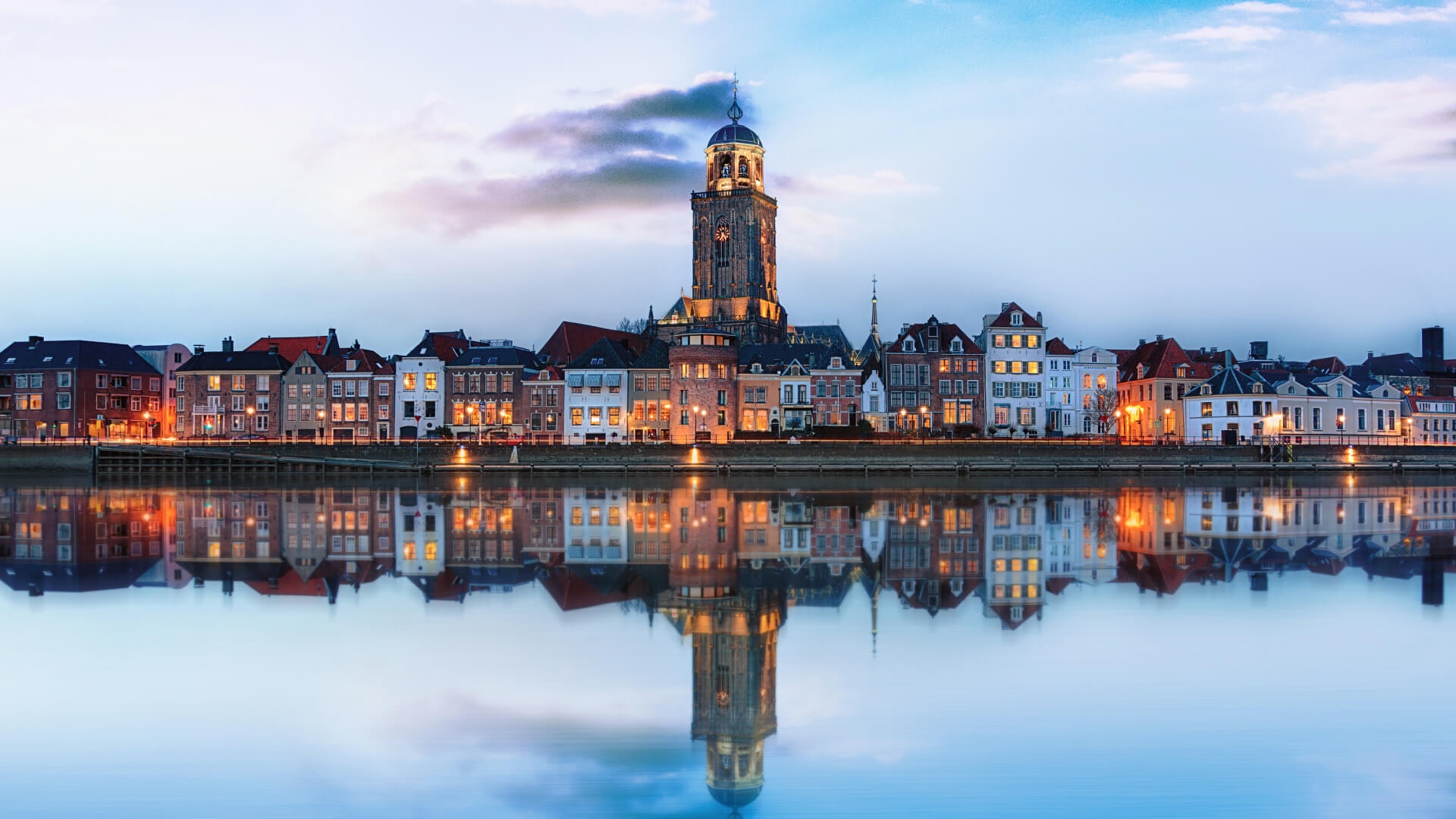 European destinations as a whole have a flavour of travel that is undeniably worth visiting. The Netherlands is widely known for its Tulips which blooms during the months of April and May. Hence, it has got its name as the ‘Land of Tulips”. This land of flowers has a strong essence of travel which definitely must not be missed. Fresh flowers in summer, refreshing spring and autumn and cool winters are what the Netherlands see every calendar season. Hence making summer months as the peak season to visit this European country. Plan your Netherlands package from India during the summer months of flower bloom. Museums to restaurants to cafes to galleries to shopping stops to gardens to culture to what not! From Amsterdam to Rotterdam, the Hague, Delft, every place is diversified culturally and united under love for travel. Try not to miss places like Anne Frank House, Historic Canals, the Royal palace of Amsterdam, Van Gogh Museum, Hermitage Amsterdam in your Amsterdam Netherlands Holiday Packages.

Places to Visit in Netherlands

Being the capital of the Netherlands, this is one of the best European cities. Your Netherlands Tour Package from India should definitely have them. Your expectation for having a destress vacation will be right satiated here. This place is an absolute blend of heritage and fun. From chill out picnic spots to chic nightlife, this place is truly a trove of a tourist destination. But, this place on its own is never spoken of but is enjoyed under the blanket of Paris and London holidays. But this place has everything that a European destination can offer. Anne Frank House, Historic Canals, the Royal palace of Amsterdam, Van Gogh Museum, Hermitage Amsterdam should definitely not be missed. Include Amsterdam in your packages and enjoy the Amsterdam Netherlands Holiday Packages.

Rotterdam happens to be the second largest city in the Netherlands. This is one of the most vibrant cities in the Netherlands , having Europe’s largest port. Get influenced by the Dutch culture filled with modernised architecture and endless tourist attractions. This ultramodern city doesn't seem to expose the scars of world war 2 where the whole city was plundered. The Erasmus Bridge crossing a river welcomes you rightly to the city of Rotterdam. This is the beginning of the beauty that has been spanned across the city. Euromast, Museum Boijmans Van Beuningen, Erasmusbrug, Fenix food factory, Market Hall are some of the best places that are not to be missed here. For the kind of vibrance this city has, Rotterdam has to be definitely included in Netherlands Vacation Packages.

The Hague is a right pick if you want to understand the administrative side of the Netherlands. The lanes of the hague are studded with embassies, courts and offices. The Hague has the nickname as the Judicial capital of the world. If you have known the Netherlands for its vibrant and fun side, get to know the beauty and magnificence of Netherlands’ architecture here. If you are someone who goes wonderstruck with the beauty of the architecture, this city is absolutely made for you. Large avenues, huge parks, exciting lanes and elegant buildings are ones this city is famous for. Madurodam, Peace palace, Escher museum, Panorama mesdag are some of the best places to visit in the Hague. This place must be definitely worth including in your Netherlands Package from India.

Utrecht is one of the best places to visit in the Netherlands. This place is definitely worth including in your Netherlands Vacation Packages. If you are someone who loves art, this place is absolutely meant for you. This place portrays the variety in diversity of Netherlands culture and is one of the best. Art galleries and museums are the ones you will find around every corner at Utrecht. The prices of food are comparatively very less here. Museum Speelklok, Tower of Utrecht, Central museum, Railway museum are all you should visit.

Located in southern Holland, Delft is one of the best places to visit in the Netherlands. This is not a cosmopolitan city but the charm of a cosy little town is what lures thousands of travellers to this place. The historicity combined with the beauty of alluring canals, every crowded open market, lively places along with cosy summer makes this place a very apt choice for your Netherlands Honeymoon Package. This place is also known for its architecture. Nieuwe kerk and Oude kerk stand as testimony to this. Beestenmarkt, Vermeer centrum, city hall, Nieuwe kerk and Oude kerk are some of the best places not to be missed. This warm town gives you a lot of memories and you should never be missing on the food tour here.

How to Reach the Netherlands from India

The Netherlands is about 7106 KM away from India and hence travelling by flight could be the most convenient option of all. Also, it would be the quickest way to reach your favourite destination.

The Netherlands is super connected within the country as well to the world around. Domestic flights could be your go to option if you are looking to travel to a place quickly. However, this turns your transport game into an expensive one. Trains are yet another option as they connect to places where these flights cannot. There are high speed trains and intercity express to enable you to reach your destination quickly. Bus travel could become your next saviour. However, they might take a long while to reach your destination. Taxis give you freedom to explore the country on your own timeline. Cycling is another option where you can see and visit places which are not possible with other transports and observe the unique culture of the Netherlands. You might also take ferries and water taxis. Make sure your Netherlands holiday packages have all of these to have the best vacation experience.

The Netherlands is one of the best European destinations. Make sure you frame your Netherlands holiday packages such that it matches your travel perception. Also, there is no single best time to visit this country. Depending on your purpose of visit, the places you have planned to visit, the things you wanted to do, the places you wanted to stay, your budget and other considerations are to be made before you decide your best time to visit.

The months of June to August are the best time to visit Netherlands. With sun basking over your head, you could head out to any place in the Netherlands and you will feel the aura of European flavour this country has to offer. The temperature is comfortably between 11 to 19 degree celsius. With the best climate round the corner, you will forcibly have to face huge crowds who with a similar intent have traveled to the Netherlands during these peak months. The prices of hotels and vacation are also relatively high. However, making memories in the Netherlands never needs a reason. Make sure you book your Netherlands trip package well in advance to book your favourite places to stay.

And if you are planning to visit the Netherlands anytime during this time of the year, this country has a lot of surprises for you in terms of weather. Visiting the Netherlands anytime from September to November could be the best time to visit if you are looking to visit in a time other than peak season. The other option could be from March to May. The temperature is ideally between 4 to 18 degree celsius. The weather during this shoulder season gives you the right reason to fall in love with the country. The prices are also relatively affordable and the places are less crowded.

Book your Netherlands Trip at Pickyourtrail

Pickyourtrail offers a luxurious Netherlands vacation you had been wanting always. A personal touch in itinerary making is what makes your travel diaries more interesting. You will be able to customize every single line of your itinerary. This 100% customization helps you fall in love with your very favourite European country again and again! Go awestruck by the combination of culture and nightlife here. If you have been dreaming of an exotic Netherlands vacation, try the Netherlands tour packages and you will have the best memories created for your lifetime!

What language is spoken in the Netherlands?

Dutch is spoken in the Netherlands. However, the majority of Dutch population are proficient in English and hence visiting tourist places and other places like restaurants, cafes and accommodation should not be a problem to you.

How much does a trip to the Netherlands cost?

On an average, a 7 day trip to the Netherlands costs about INR 77,700 per person. It is important to consider your preferences for food and stay and hence depending upon your budget of the Netherlands trip package this number can be increased or decreased.

How often does it snow in the Netherlands?

It snows for 20 to 30 days on an average per year. Finding this country covered with a thick layer of snow is a rare sight and hence, it just snows a month approximately. Hence do not plan your Netherlands vacation packages during these months.

How to apply for a tourist visa for the Netherlands from India?

Download the Netherlands schengen visa application or fill it electronically and print them. Have 2 copies of the application. Have 2 copies of your photo with a light background. Your passport with 2 blank pages at least and a copy of previous visas. A copy of return ticket along with travel insurance. Proof of sufficient money along with proof of accomodation in the Netherlands is all you need to submit before your visa is processed and reaches you. For an adult, it costs about INR 6995. The visa processing might take upto 15 days. Hence plan your Netherlands travel package well in advance.

When is Tulip season in the Netherlands?

Your Netherlands trip will absolutely be amazing if you visit this land during the months of mid - March to May. The beauty of these flowers accentuates during these months especially during the month of April you will find a full bloom of 3 million flowers in a piece of land.

How to reach the Netherlands from India?

What are the must see places in Amsterdam, Netherlands?

Design your Amsterdam Netherlands holiday packages such that you visit all the important tourist destinations. The Netherlands is one of the most unique destinations. This European country helps you discover a different treasure from the trove. Amsterdam is a cultural hub of the Netherlands. Rijksmuseum (National Museum), Anne Frank House, Van Gogh Museum, Jordaan, Vondelpark, Dam Square, Royal Palace of Amsterdam and the botanical garden are a must visit here.