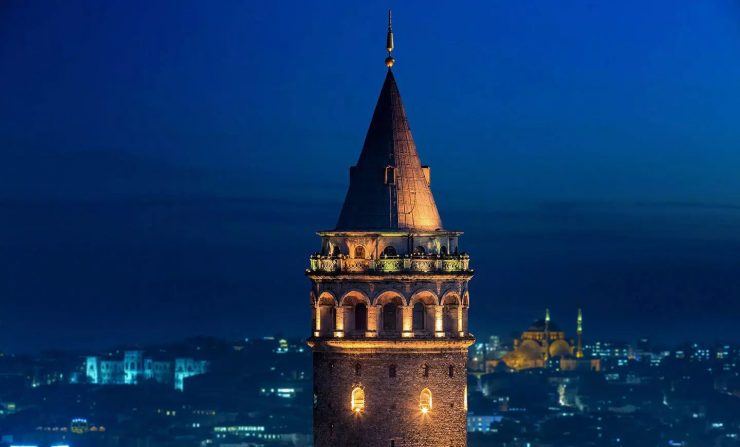 The Galata Tower, called the “Galata Kulesi” in the Turkish language, is one of the oldest and highest towers in the city of Istanbul. It is 63 meters (or 206 feet) high. People can experience a panoramic view of the old town from the tower. Galata Tower in Istanbul has a unique blend of great views as well as the ancient chills that one can only feel at the viewing of amazing architecture and scriptures. Galata Tower is one of Turkey’s greatest tourist spots. This was considered as a cozy spot for lovers from around the world for decades.

Genoese people or colony as part of the defence wall that surrounded their district at Galata in the 14th Century. The defence wall stands directly opposite to the Ancient Constantin polis. The tower is also known as “Christea Turris” or as the “Tower of Christ”. Since the Genoese people were extensively involved in trade with Byzantines, there was a necessity for the Surveillance tower. The harbour was located in the region called “Golden Horn”. This served as a tower that provided aerial surveillance of the people. it was used as a location to detect fires in the city, after the arrival of Mehmet II at Constantinople.

The tower was opened to the public for usage and viewing once the republic was announced in 1967. The tower comprises a cafeteria on top of it and a night club. But the night club was shut down after the latest restoration in 2013. For you to get onto the terrace, there are a couple of elevators. But they will take you to a certain extent and the rest can be climbed only by the staircase and the total height to climb is close to 52 meters above the ground. Inside the tower. There is also a small souvenir shop here, at the entrance level of the tower, just across the ticket office.

Observation Gallery – Since it was once used to detect fires across the city, it now serves as an observation gallery from where people can get a panoramic view of the old part of town.

Roof-top café – As the name suggests, it is literally located on the top of the roof,  serving some of the best Turkish cuisine and liqueur.

Availability of historical costumes – This seriously has something for history lovers. Don’t forget to try on some of the Ottoman costumes, giving a rich, wholesome cultural experience on tour. here on display for those interested.

Light shows –  Once the sun sets in the evening, some amazing light shows that take place, making for wonderful viewing. You get to see the ancient scriptures being enlightened by the falling lights.

If you are someone who always wanted to experience Istanbul’s party culture but not a serious one, this is it! No hyper dancing, jumping, nothing of that sort. This is a gentleman’s party I would say. We at Pickyourtrail help travellers with customizable itineraries to any destination with tons of activities to select from. Check us out here! and get away with your Turkey vacation.