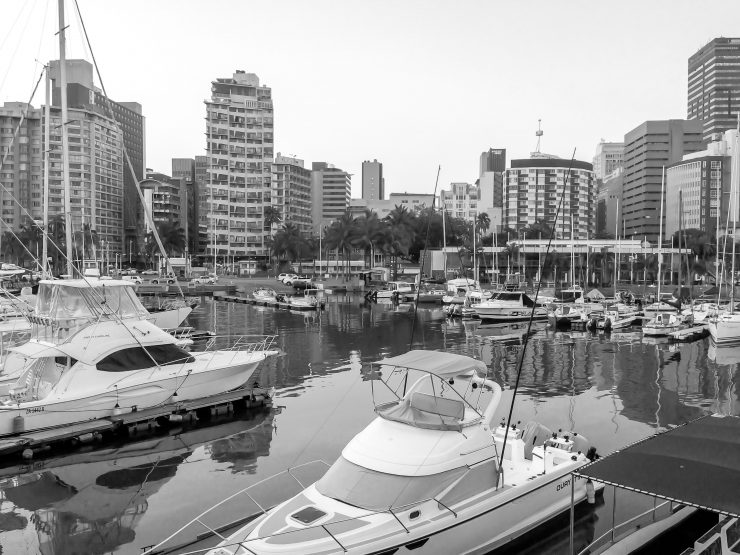 Durban has a typical subtropical climate with wet, humid summers and surprisingly mild, dry winters that are snow-free and clear of frost. Durban has 1.009 millimetres (39.7 in.) of rainfall per year. The annual summer temperature varies from around 24 ° C (75 ° F), while the typical winter temperature is around 17 ° C (63 ° F).

Durban sits on the east coast of South Africa and gazes across the Indian Ocean. The city is at the source of the Umgeni River, bordering parts of Durban ‘s northern city boundary, though other parts of the river run through the city itself. Durban has a huge harbour, Durban Harbour, which is the biggest harbour in South Africa and the fourth largest in the Southern Hemisphere.

Durban is renowned for its dry, subtropical weather and large, beautiful beaches, making it a tropical paradise for lazy, relaxed sunshine days and exciting nights packed with bright lights, music and busy streets filled with people, and an exciting energy that can’t be described altogether

Reasons to visit Durban, at least once in a lifetime

Attributable to the magnificent environment Durban enjoys during the year, its beaches are as mild and swimmable in winter as they are in summer – unlike Cape Town, its sister city.

Durban’s Golden Mile is a surfer’s vision of utopia, although north Durban beaches draw as much interest, albeit wilder.

Durban isn’t (yet) as popular as South African destinations like economically improved Cape Town and Johannesburg, making it a much cheaper place to stay and vacation in. Food, rent, and entertainment in this seaside town can be much cheaper, making it a great holiday destination where tourists can save some bucks.

Durban has retained the region for three years straight, for the highest standard of life in South Africa. Mercer’s global foreign report lists cities around the world in terms of quality of life. Durban finished ahead of Johannesburg and Cape Town and was ranked second as the best city in Africa after Port Louis, Mauritius.

When it comes to food and drinks, Durban has easily kept up with its more worldly relatives-Johannesburg and Cape Town. This also has a good craft beer, food and drinks scene (with the occasional distillery making liquor produced from local ingredients) and popular weekly food markets such as the I Heart Market and the Morning Trade Market, despite its immense curry renown.

Unpretentious and multi-cultural, the citizens of Durban are as diverse as they are, almost without question, warm, depending upon where you go.

If visitors want a vibey and cultural blend, it is suggested to go to Durban harbour or downtown; to Chatsworth or Tongaat for Indian curries; or to Umlazi or KwaMashu for house music and braaied beef.

Cape Town may be famous over the ocean for its epic sunsets, but its breathtaking sunrises are the hidden secret to Durban. Wake up early enough to see the sun rising majestically from the ocean amid a group of early joggers to surfers on a promenade. It is one of the best hidden secrets of Durban, and the most stunning.

One of the Durban point region refurbishment initiatives was to open up a wide world of water toward South Shore. Ushaka Marine World features an aquarium, water park, and retail village cycle. Head over to the Ushaka Sea World after a fun day at the Wet’n Wild Waterpark. The world’s fifth-largest aquarium, it is underground and has been designed around five shipwrecks.

Durban has cliffs, valleys and the sea. Everyone knows about the spectacular ocean of Durban but what people overlook is that people will go inland for a few kilometres and travel across the beautiful midlands or go deeper into KwaZulu-Natal to see a variety of reserves for sports. Further on the frontier between South Africa and Lesotho, see the magnificent Drakensberg Mountains, which offer even snow during a cold front.

The Gateway Shopping Centre, north of Durban, is one of the world’s 50 biggest malls and continues to be the biggest centre in the Southern Hemisphere. With 18 movie theatres, over 400 shops, an arcade, an amusement park and a water park, the centre provides dining and leisure opportunities for everyone.

Durban is a great community melting pot. The main racial groups are South Africans Zulus, Indians and English. A vibrant blend of beliefs, races and cuisine comes with them. If the travellers happen to be in April in Durban, they could be in for the Chariots Party, the vibrant Hari Krishna parade.

There is no one ideal time to visit South Africa: because of its differing national temperatures and natural resources, it is a year-round destination.

South Africa’s northern regions may be rainy from November to February but this may be the best time for birding to fly. The colder May to September winter months offers excellent weather for playing a big game.

Pickyourtrail not only ensures smooth and trouble-free travel but also DIY itineraries to provide one-stop-shop for all travel needs keeping the cost-effectiveness under check. The imaginative approach to production takes into account factors such as a tourist’s curiosity, the length of a trip and the brand’s spending. For more information login to www.pickyourtrail.com and start planning your perfect vacation.