Home » Top Holiday Destinations » Europe Travel Blog » Italy Travel Blog » Things To Do In Lucca When You Visit Italy With Your Loved Ones!

Things To Do In Lucca When You Visit Italy With Your Loved Ones! 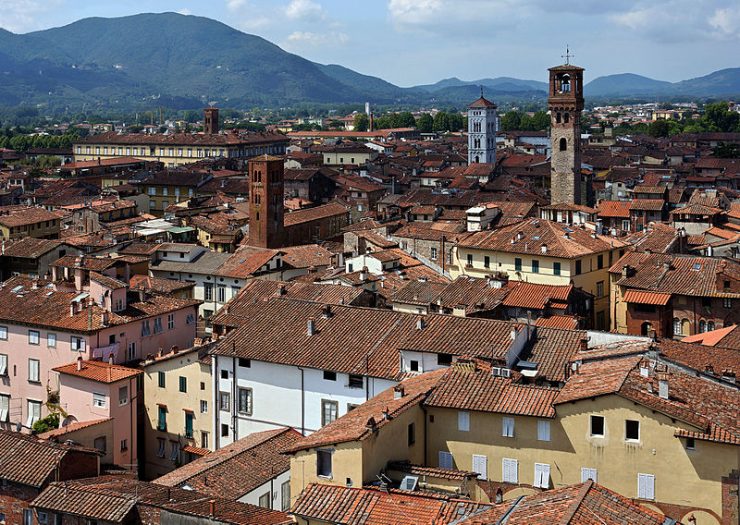 Lucca, one of the most romantic towns in Tuscany, holds many attractions for tourists. Its historic centre, with medieval towers and nearly 100 churches, is completely enclosed by its walls, which make it a good city for walking, biking, and shopping. Find a beautiful place to stay and explore all that Lucca, Italy, has to offer.

The walls enclosing Lucca’s historic centre are some of the best-preserved ramparts in Italy. Take a walk around Lucca to experience the cultural-historic vibe. In the 1800s, the top of the thick wall was planted with trees and grass turning it into a huge park and a pleasant place to walk or ride a bike. In fact, there are more than four kilometres of walls with six gates and 11 bastions.

San Michele Church is in the large square that was originally the Roman Forum in the centre of Lucca. Today, it’s still a lively square lined with medieval buildings housing cafes, shops, and homes. The square is a favourite place in Lucca to sit and have a coffee. The beautiful marble church, built from the 11th through 14th centuries, has a large Romanesque facade—larger, in fact, than the actual church. It’s topped with a statue of the archangel San Michele, or Saint Michael.

Lucca’s cathedral, for San Martino or Saint Martin, locates on Piazza San Martino surrounded by beautiful medieval buildings. Originally built in the 12th to 13th centuries, it’s Romanesque in style and has an intricately decorated marble facade. Near the cathedral, there’s a 13th-century bell tower and Casa dell’ Opera del Duomo, a native medieval house of Lucca. The interior is Gothic and holds many artworks, including the Volto Santo and the 15th-century tomb Ilaria del Carretto, a masterpiece by Jacopo Della Quercia.

Explore the Church and Baptistery of San Giovanni and Reparata

Built-in the 12th-century, the San Giovanni Church partially remodelled in the 17th-century but still has some Romanesque features. Inside the church, you can go underground for a fascinating look at archaeological excavations. This historic structure stands from first century BC through the 11th century AD and includes Roman remains, as part of a medieval crypt. It’s open daily from mid-March through November 2, and on weekends and holidays the rest of the year. Each evening at 7 p.m. the church holds a music performance.

Stroll Around the Piazza dell’Anfiteatro

Piazza dell’ Anfiteatro, an oval-shaped piazza, was the site of a Roman amphitheatre. You can still see parts of the original oval ground-plan and outer ring of 2nd-century construction. Buildings and houses built around the arena during the middle ages. Surrounded by shops, cafes, as well as restaurants both inside and out, the lively Piazza has got everything! In July, it’s the venue for open-air music performances.

Lucca is a good city for shopping. There are many enticing shops for delicious foods, jewellery, and fashion, and several artisan workshops to visit in the historic centre. Via Fillungo is the main shopping street in the historic centre. Here you’ll find all kinds of stores, from food and wine to clothing and household items. The street is mainly pedestrian and almost always full of people walking and browsing the wares. Also on Via Fillungo is the Torre Delle Ore, or clock tower, another medieval tower that you can climb.

In a 15th-century villa near the east walls, the Villa Guinigi’s museum has local artefacts and artworks from prehistoric times through the 17th century. There’s a large collection of local Romanesque, Gothic, and Renaissance art including 15th-century wood inlays. Combination tickets are available for Villa Guinigi and the National Museum in Palazzo Mansi, near the west walls. Palazzo Mansi has paintings as well as the tapestries and frescoes of the 16th- through 19th-century palazzo itself. Palazzo Pfanner, with a costume collection, lovely gardens and is another palazzo that can be visited.

Relax in the Botanic Garden

Lucca’s botanic garden has a small lake with water plants, a collection of mountain plants, succulent display, greenhouses, and medicinal plants and herbs. It’s a peaceful place to get away from the crowds. In summer, there are evening concerts scheduled, too.

Take in the Architecture of San Frediano Church

San Frediano’s facade boasts one of the best architecture with a stunning 13th-century Byzantine-style mosaic. Firstly, the church has a gold leaf mosaic that glows beautifully in the sunlight. You can also see some colour to make the apostles and Christ stand out from the decor. Originally built in the 6th-century the church remodelled in the 12th-century. Inside is a Romanesque baptismal font. There are also several artworks and frescoes as well as the mummified body of The Incorruptible Santa Zita.

Go to the Puccini House Museum

Puccini, the famous opera composer, was born in Lucca and his home is now a museum with his piano, musical scores, and more Puccini memorabilia. In the Piazza, there’s a bronze statue of Puccini bearing his name, a pleasant square with a few cafes and a restaurant.

Reasons outnumbered for you to kick-start your bookings as it’s never too early to plan a vacation. This delightful vacation will be filled with adventure, luxury and tasteful experiences. We at Pickyourtrail ensure our best travel experience is put into crafting your itinerary. Start customising your itinerary online with the top highlights and Happy travelling!

Things To do In Slovenia: The Top 15 With The Ultimate Guide