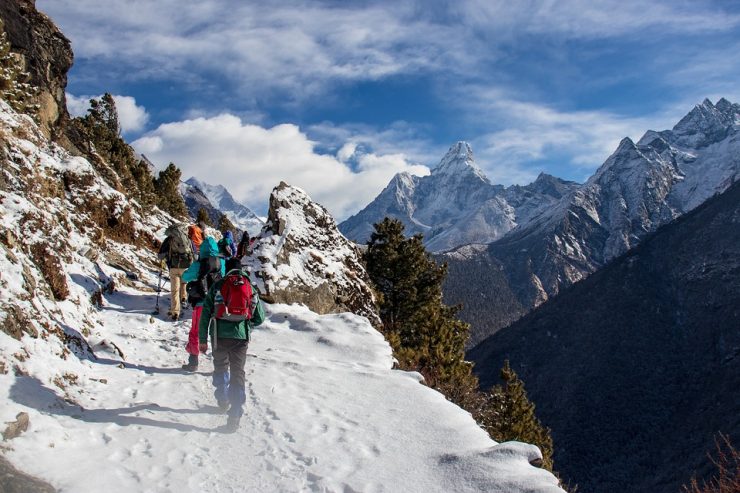 Summer for a significant portion of us is the scorching heat and sweaty orifices in our bodies, in certain other parts of the country though it’s a great time to be out and about. Especially in the Himalayas where it’s the best season to trek and explore the mighty mountain range. For a lot of beginners though, it might be a bit intimidating and a daunting task choosing among the various options laid out in front of you. Don’t worry we’re here to help, in this article we will be taking a look at the top 6 Himalayan treks that you can get behind.

The Kedarkantha summit in Himachal was one of the first-ever summits for which treks were professionally organized and today it is a very popular trek that is quite sought after. This is an easy and moderate trek that takes around 4-6 days depending on the route and operator. While this is considered to be a bit difficult for beginners, its a trek that is very well documented and understood. This makes it so that if you are a beginner you can get the right support to guide you through it. The Kedarkantha trail also has some of the best campsites and viewpoints which make for a very wholesome experience. Another highlight is the drive to the basecamp itself, where you can indulge yourself in scenic drives through the thick pine forests and scenic beauty that is all around. The Treks are also quite short with the Kedarkantha trail as the incline is quite steep but the overall distance is around 24kms. This means that you get to the next campsite every afternoon but you do have to scale around 7000 ft across the 4 days which is a definite test of endurance. The summit comes in at an altitude of 12,500 ft.

The Beas Kund Trek is just 550 km away from the capital city of Delhi, the base camp is quite close to Manali actually. This is another easy to moderate level trek that takes around 4 days to scale. It is a bit more difficult than the Kedarkantha trek but it is much more rewarding. The setting of the trek passes through lush green meadows, ancient forests with coniferous trees that scale so high that you can’t see their peaks when you’re under them. You passthrough water streams and in the summer you can see expansive beds of flowers on the grasslands and almost through the entire trek you are surrounded 360 degrees by amazing mountain ranges. The summit comes in at around 12,772 ft.

Now if you are thinking, ‘all this sounds good but I really don’t have 4 days to a week at hand’. Well, don’t worry, I hear you. The Nag Tibba Trek can be done over a weekend and takes just 2 days to scale and it’s very much rewarding as you still scale to the summit which comes in around 9,914 ft. The trek is very much beginner-friendly and is easily accessible from Mussoorie and is quite relatively unknown. You get most of what makes an amazing trek such as the views, beautiful campsites, views of snowcapped peaks but all of it packaged a long weekend. If you are new to trekking then you should put this on top of your list and look into it more.

The Valley of Flowers trek is almost a weeks trek spanning around 6 days, It’s a trek that is the stuff of legends. Unlike other treks that have their focus set on the amazing and imposing mountain ranges, The valley of flowers trek is uniquely known for valleys with expansive and vast flower beds. You see a much lusher and greener side of the Himalayan valleys and legend says that trekkers have gone unconscious because of the heavy scent of the flowers. We are not sure if its a bit of altitude sickness or low blood sugar levels playing a part but the reputation stands nonetheless. This is another amazing moderate level trek where you get to see amazing valleys, rivers, and the glaciers that are the source of them all. The summit comes in at an altitude of around 14,107 ft which is also the highest we have covered so far and definitely a bit more extreme to scale than the other ones as well.

If you are looking for something a bit off the beaten path. Well look no further, The Gidara Bugyal trek is kinda the trekking communities secret. Shh now, don’t go ratting me out. The trail is extremely secluded and not many set afoot here. It is a trail of moderate difficulty with steep inclines and declines that you will have to scale. However, this is the trail with one of the least amount of foot traffic. There is hardly any civilization around, you mostly just come across sheepherders from the local communities. At most times you are the only humans and trekking group around and you feel truly disconnected here. It’s an amazing trek that does require a bit more prep and training but it is definitely worth it. You also get to visit some hot springs en route.

As we close this listicle ill leave you guys with another short weekend trek. The Sainj valley trek is quite special since it allows climbers to trek through a part of the Great Himalayan National Park which is classified as a UNESCO world heritage site. It’s highly protected and the flora and fauna have been allowed to flourish with minimal human interference. You get to pass through amazing meadows, traditional villages, rich apple orchards and ancient forests that light up with the sounds of various birds. Being a part of the Great Himalayan National Park makes it an amazing trek for wildlife and especially bird-watching enthusiasts. You have the unique chance to spot endemic species of birds here and all this put together makes it one of the best beginner treks around.

So that brings this listicle to a close and those are my top 6 Himalayan Treks of choice. Do you guys have any that you’d also like on this list? Be sure to let us know. If you need help with planning your trip to the Himalayas, well feel free to reach out to the good folks at Pickyourtrail who will help you plan your vacation based on your requirements and specifications. Book your customized itinerary now!

Things to do in Mashobra – Unknown Gem in Himachal

Places to Visit in Dhanaulti – A Paradisiacal Hill Station