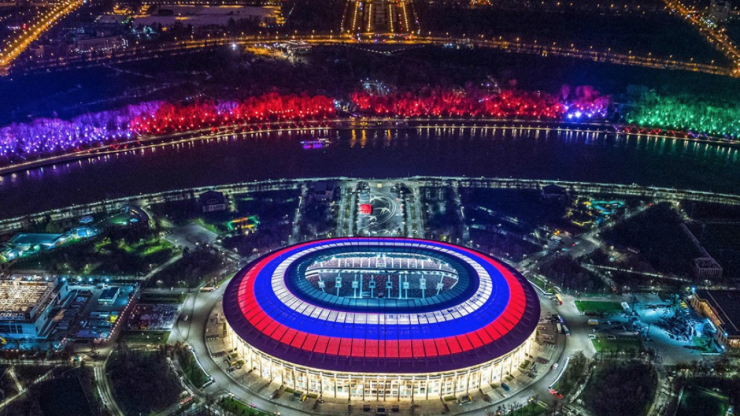 It’s time to GO FOOTBALL! With the 2018 FIFA World Cup coming up, we know for a fact the hardcore footie lovers will be heading to Russia to watch their favourites- Luis Suarez, Philippe Coutinho, Timo Werner and Cristiano Ronaldo score screamers and do the jump and glide celebrations. Also, if you hold the FANID – An ID tagged with the match tickets, you will get a VISA FREE entry into Russia. How awesome is that? Not just that, the services of the public transport can also be availed free of cost in the cities which hosts the match. Now calm down, will ya? Did you also know that Russia is home to various cultural sites, skyscrapers and bustling markets? Here’s a list of the best places to visit in Russia during the 2018 World Cup.

Note them down good and let us know, because we know to get your European tour packages done just about right!

Moscow is where you will find Asian and European cultures mixed. From the buzzing nightlife to top-notch theatre at the renowned theatres of Na Raushskoy, Bolshoi Theatre and Theater on the Embankment, Moscow is an entertainment hub of sorts. The GUM mall and Levsha flee-markets are sure to have your interest piqued with their variety. Parks and gardens of Moscow Hermitage and Lilac gardens, some history digging in Armoury and St. Basel’s Cathedral, Moscow has so many places to be ticked off during your visit. Get ready for some quality Moscow action!

Kazan was found in the year 1005 and is older than Moscow. Apart from being an important host of 2018 World Cup, this city also holds accolades for many other sports events which earned Kazan the name, ‘Sports Capital of Russia’. When it comes to Kazan, you can find spires of cathedrals and mosques alternating each other. The notable ones that you could have a look at would be the Temple of All Religions, Kul Sharif Mosque and Cathedral of the Apostles Peter. A bit of wandering along the Russian Tatar fortress would be exciting for cultural & history addicts.

Quick Read: How to plan your European trip?

What started as an arena for the execution of the Romanovs family, the city of Ekaterinburg went through a drastic change to becoming a modern city. With the hardcore economic centres of Russia, Ekaterinburg has eye-catchy art galleries and historical wonders. Golden dome structures and tall walls – Church On The Blood is a famous site in the city. The city’s skyline can be enjoyed at the Vysotskiy Viewing Platform. It’s time to get the best of Ekaterinburg when you are here to watch the Worldcup match.

Located in-between the rivers Samara and the Volga, the horizon of Samara city is speckled with the colourful, large mosques, cathedrals and synagogues. The city is well known for the Vostok 1 rocket launch, explore more of Russia’s space escapades at the Samara Space Museum. If you are interested in hiking and trails, trekking at Zhiguli Mountains and casual strolls on the Samara Embankment would be a good idea.

Quick Read: Where should you go for a trip in March?

St Petersburg, also called the Imperial capital of Russia tops every other place in the country for its grandeur and regal buildings. Be prepared to be dazzled by its many palaces and museums. This city is a popular choice among travellers and is ranked among the top places to visit in Russia. St. Petersburg is known to be Russia’s cultural centre and its many ballet and opera events are a must do on most travellers list.

Locals fondly call Kaliningrad as the ‘ Little Russia’. Offering cultural wonders, the tomb of Immanuel Kant can be checked out at the Königsberg Cathedral. This place also hosts musical concerts for the tourists. Kaliningrad is famous for amber. Having the largest deposit of amber in the world, Kaliningrad’s economy revolves around it. There’s a special museum for the same. Don’t be surprised if you find lots and lots of amber made jewellery and accessories in the prime shopping spots of the city.

Sochi would be well known among ardent sports lovers given the fact the city hosted the 2014 Winter Olympics. You have the summer house of Stalin, where the dictator spent the last years of his life. The Byzantium empire ruins and other museums are also famous in Sochi. A bit of skiing in the Caucasus mountains, some sighting at Mount Akhum and Ritsa lake, a relaxing swim in the Black Sea can also be done during your trip. Don’t miss out on the Kinotavr Film Festival which happens only in June.

The port city of Rostov-on-Don lies along the Don River. It is the most preferred location when it comes to coastal activities. A relaxed boat ride is also suggested. You can feel the complete Russian lifestyle given the choices of local food offered at the Rostov’s Central Market. A bit of casual strolling along the Bolshaya Sadovaya and Pushkinskaya streets can also be done. For cafes and aesthetic dine-outs, check out Pushkin Street. If you are interested in taking a peek at the orthodox side of Russia, do visit the Bogoroditsa Cathedral where you can find beautiful domes and prayer sessions.

Volgograd, as the name suggests, is a city lying on Volga River. It has witnessed one of the most blood-curdling battles of World War II.  The most popular destination here would be the sacred spot of ‘ The Motherland Calls ‘. This statue was built in honour of those soldiers who lost their lives during the wartime. Suggested outing areas at Volgograd would be the Komsomol Park and the Lake Elton. Visit the Volgograd Planetarium during night time to check out the ‘sky full of stars’.

The city of Saransk is named after the famous Saranka River in Russia. With renowned cultural outing areas and richness in historical heritage, Saransk has various places to visit. Cathedral of St. Fyodor Ushakov is very famous for the French touch to its architecture. The Mordovian Republican Fine Arts Museum is famous for its sculptures and artworks of Mordvin Fedot Sychkova.

Nizhny Novgorod is one of the oldest Russian cities and is home to a number of theatres, museums and churches. The Kremlin is the most talked about fortress in Nizhny Novgorod. You can find some of the oldest wonders of the city like the Cathedral of the Archangel here. You will be stunned when you take a look at Church of the Nativity of the Blessed Virgin Mary. The church has a beautiful backdrop. Go for some nice evening strolls at the Bolshaya Pokrovskaya and enjoy a cup of coffee in one of the street cafes!

Russia will definitely have you on your toes all the time with its rich history and culture. So, after watching your stars kill it at the 2018 World Cup matches, take some time off to check out the best places to visit in Russia! Already have a Russian tale you could share with us? Tell us more about it here!

Where to go in Europe

Hiking in Azerbaijan: Trek up the magnificent mountains