Things to do in Frankfurt, Germany – 8 fascinating things to do 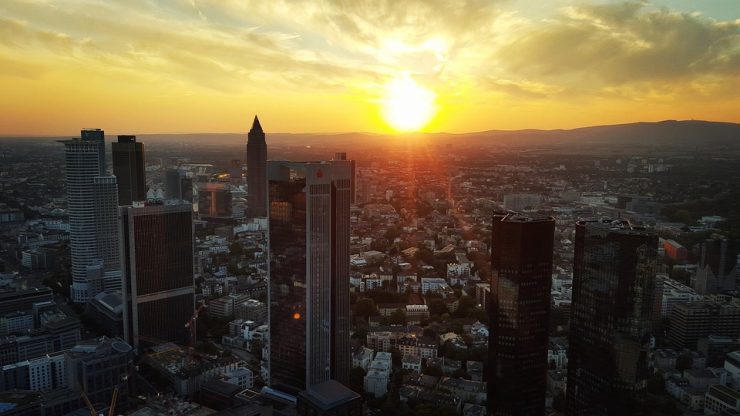 Located in the heart of Europe, Germany is a beautiful and diverse country with an impressive culture and endless travel opportunities. The thick forests, fairy-tale castles, and the picture-perfect towns of this Western Europe country are something that you shouldn’t miss. There’s a number of destinations with splendid architecture and unquestionable charm. They also offer an abundance of activities and things to do that will soon make you wonder why in the world you haven’t visited Germany earlier. Are you interested in sightseeing or experiencing the beautiful skyline and the busiest German airport? Then make your way to Frankfurt, the financial capital of the European continent. Read on to know the best things to do in Frankfurt.

Top 8 things to do in Frankfurt

Bankenviertel, the central business district, is sure to capture your attention right away with its tall skyscrapers. Frankfurt’s city centre not just has tall skyscrapers but they are also bursting with sights like Sachsenhausen, where taverns serve traditional Apfelwein and like the church that held Germany’s first democratic parliament. There’s more when it comes to things to do in Frankfurt, that could keep you fascinated and entertained for days or even weeks.

Let’s explore the best 8 things to do in Frankfurt

Museumsufer meaning ‘Museum Embankment’, is a cluster of 12 museums grouped together on both sides by the River Main. These unique museums offer cultural delicacies from art and architecture to film, fine arts, antique sculptures, Jewish history and many more. They also display the rich communication and ethnography of Germany. Of the 12, the majority of the museums are located only on the southern side, i.e. on the left bank.

The Stadelsches Kunstinstitut und Stadtische Galerie is known as the Stadel Museum. It is one of the top cultural attractions in Germany. The German banker Johann Friedrich Stadel donated some of his valuable collection of old masterpieces and this eventually led to the founding of the Stadel Museum in 1815. This museum displays an array of paintings from 1300 to the present. In 2012, this museum was awarded ‘The Museum of the Year’ by AICA (a german art critic association).

Officially known as the Imperial Cathedral of Saint Bartholomew, this Frankfurt Cathedral is dedicated to Saint Bartholomew. This Cathedral took on a special meaning during the 19th century when Germany was united due to its historical importance in the then Holy Roman Empire. This former collegiate church is now the largest religious building in the city. It turned to be a cathedral from 1562 when it started hosting the coronation of Roman kings. The most notable features of this cathedral include the 14th-century choir stalls, the Baroque Assumption Altar and the 15th-century fresco of the life of Mary.

Romerberg is a public space located just opposite to the Romer building complex. This quaintest square represents a classic example of the traditional half-timbered architectural style of the olden days. It is walled by photogenic medieval houses that bear its own name, the Old St Nicholas church and few other historic administrative buildings. The Old St Nicholas church stands just opposite to the Renaissance Fountain of Justice and holds the pride of surviving the war without major damage. The western side houses bars and restaurants while the eastern side has most of the handsome half-timbered houses.

Take a stroll on the banks of the Main River – a peaceful escape from the bustling city of Frankfurt. Mainkai is the best place to be with your friends and family. The waterfront planted with lawns, flowerbeds and pollarded trees, makes it an ideal place for a picnic. This place is often crowded with a lot of people in the evenings. This place is merely a 15-minute walk from the Westin at Mainkai Street.

Stroll around the cafes, pass under beautiful bridges and lay in the park, thus having an awesome leisurely pastime. The best time to visit is during sunset or at night when the Bankenviertel is lit up.

Originally the residence of the Goethe family, this building now serves to be a museum. This home turned museum is a must-visit for tourists coming to Frankfurt. The notable writer Johann Wolfgang von Goethe lived here until the age of 16, i.e. until 1765. In this upscale home, you will be able to see the dining room, bedrooms and most importantly the top floor where Goethe penned his earlier works. This house museum also gives you an insight into the life and times of Goethe.

The interior of the house-museum is completely furnished with present-time artefacts like an astronomical clock that he admired and belonged to a family friend. If you are interested, make your way to the Goethe Tower nearby. It offers stunning views of the city.

Palmengarten is a verdant sanctuary in the midst of Frankfurt’s skyscrapers. It is a tropical paradise bursting with enchanting flora and fauna. Opened in 1871, it covers 22 hectares of plant species from all around the globe.

The Palmengarten is home to 3,000 species of plant. They are organised across stunning themed gardens and are housed within vast conservatories. The most notable house here is the Art Deco-style Palm House. It is one of the largest conservatories with lush jungle-like giant shrubs, trees and ferns covering every corner. It will also make a perfect family day out for budding botanists and adults alike.

All these are just a few of the things to do in Frankfurt. This beautiful city with a long and rich history is quite a popular tourist attraction in Western Europe. Germany, with its historic cities including Munich, Berlin, Hamburg and other small towns, has so many beautiful and unique places to visit and cherish. From stunning landscapes to charming attractions, this country has everything in it. So, what are you waiting for? Check out the bestselling Germany packages in Pickyourtrail. Explore it all on a customised trip to Germany with your friends and family. Book now!

Unwrap the world with Pickyourtrail!

Things to do in Stuttgart, Germany – Top 6 things to do