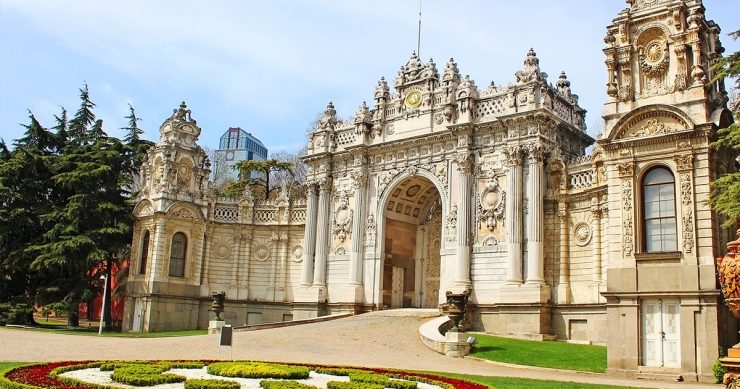 Dolmabahce Palace, one of the most charming buildings in Istanbul. The construction was completed in 1856, after 13 years and served as the administrative centre of the Ottoman Empire until 1922. This can also be witnessed when taking the Bosphorus tour. The Palace is 600 metres long.

The palace was commissioned by Sultan Abdülmecid, who wanted more European palace than Topkapi. The design was done by Armenian architect Karabet Balian and his son Nikoğos Balian. It is a flashy blend of Baroque, Rococo, Neoclassical and modern Ottoman architectural styles.

What shouldn’t be missed?

The palace has a very vast dining hall, with handmade floors. This is so unique as you can see the luxury woven into the floor design. This is a delicate masterpiece that one should not miss.

The Palace has so many other things, but one thing that truly stands out is the 4.5-tonne chandelier, in the ceremonial hall. It was Queen Victoria’s present and it is the world’s largest Bohemian crystal chandelier.

The National Palaces Painting Museum (Milli Saraylar Resim Müzesi) opened was in 2014. It was constructed in an annex of the palace. It contains 202 fine examples of late 19th and early 20th century paintings. ‘Turkish Painters 1870–1890’ room, which includes two Osman Hamdi Bey works and ‘İstanbul views’ room, which represents the 19th-century street scenes by Fabius Brest are few highlights of the museum. The gallery can be accessed in two ways. One from the palace grounds and another one from Dolmabahçe Caddesi just before it turns into Beşiktaş Caddesi.

Amazing Facts about the Dolmabahce Palace

The women of the harem were kept hidden behind the grilles. They were allowed to watch the grand ceremonies in the hall through the grilles.

All the clocks in the palace are remained set at 9.05 am. The reason behind this is that the founder of the Turkish Republic, Mustafa Kemal Atatürk died in this palace at the very same time on November 10, 1938. The whole of Turkey standstill in remembrance, every year at this very time.

The construction cost was around five million Ottoman mecidiye gold coins. It for the current value it is equivalent to $1.5 billion. But anyhow in recent times,  the financial status of the palace is deteriorating due to various reasons.

When is the Dolmabahce Palace open?

What else near Dolmabahce Palace Istanbul?

There a number of other sights in the area worth seeing, since it is located between Beşiktaş and Kabatas. The notable ones are neo-baroque Dolmabahçe Camii (Dolmabahçe Mosque), the Dolmabahce Clock Tower, the Palace Collections Museum, and Istanbul Naval Museum.

The palace has an unbelievable gallery, as mentioned earlier. So if you want to travel back in time and witness the actual lifestyle of people you shouldn’t miss this. And you get a chance to visit the world’s largest chandelier as well. Of course, the Bhosporous tour is pretty much commonly taken tour for the most part. Since this comes as a part of the whole day’s tour, there isn’t much time to spend there for you. If you are really looking forward to exploring this in detail, then you would need at least half a day. Wait no more! Have a look at the various Turkey itinerary on Pickyourtrail.com and start planning right away.