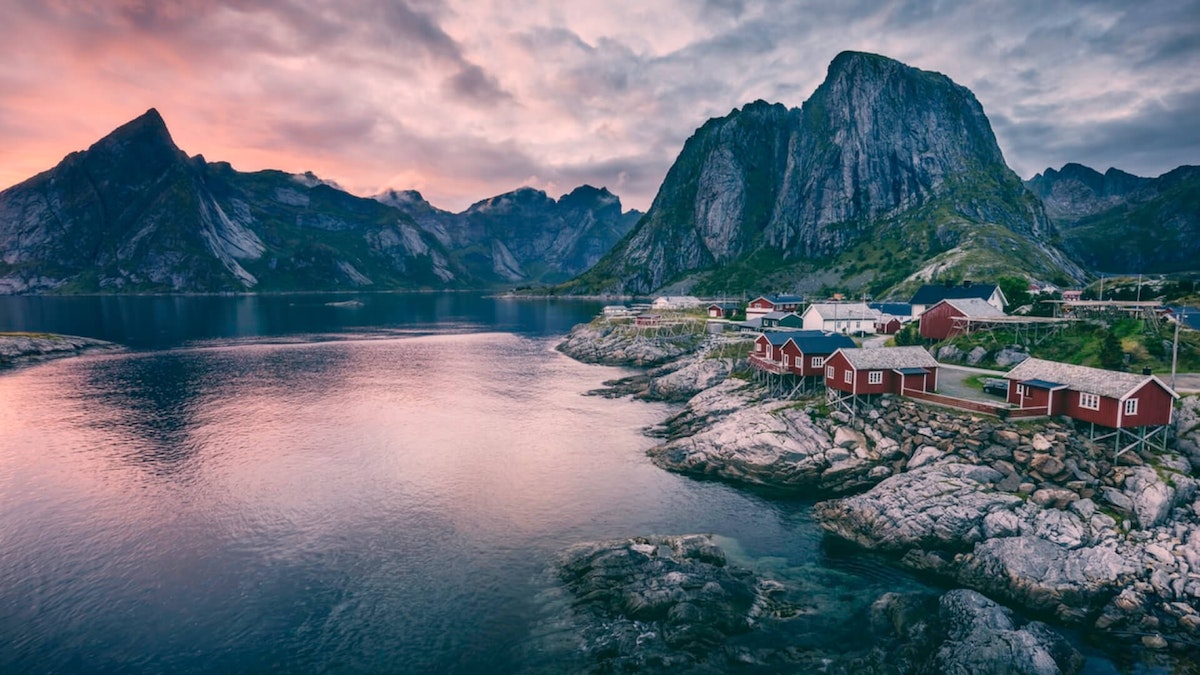 Norway offers guests an unfathomable blend of social and scenic attractions. From cosmopolitan Oslo to its snow-topped mountains there's no closure of decisions for explorers in the place that is known for its Aurora Borealis. Norway's first commutation offers the absolute best touring options whether by railways or the incredible beachfront steamers. Norway has a significant rich social history, covering everything from the Vikings to marine just as craftsmanship and amusement. Norway is likewise wealthy in a fantastic landscape, from its fjords to its fabulous mountains and icy glaciers. If you want to go to Norway then plan your Norway holidays with pickyourtrail’s customised Norway tour packages.

Alesund is situated on Norway's west coast. Alesund is the destination to the famous northwestern fjords and high mountains. The city of Alesund owes its beautiful appearance because of its recreation after a fire in 1904. The city was modified with stone and block in the compositional style of the time and stands today as a Jugendstil plan. Tourists can become familiar with the style at the Jugendstilsenteret, or Art Nouveau Center. A climb up the 400 steps to the top of Fjellstua is beautiful and a must do on your Norway tour package from India. The mountain top offers dazzling views on Alesund and the encompassing islands.

The biggest city in Northern Norway, Tromso is popular both for its enormous number of eighteenth-century wooden houses and for the excellence of its characteristic environment. A large part of the city is arranged on the island of Tromsoya where tourists will be able to find a lot of historical centers and walk around shocking birch tree backwoods. Entangles Storsteinen Mountain in the Fjellheisen Cable Car offers guests astounding views on the nearby fjords and mountains. The ice aquarium Polaria and the Polar Museum are main attractions right now 350 km (217 miles) north of the Arctic Circle. Tromso is perhaps the best spot in Norway to see the Northern Lights on your Norway northern lights package holiday.

The biggest of Norway's fjords, Sognefjord is at 204 kilometers inland and diverges into littler deltas and fjords en route. At its largest, it is right around five kilometers over, held as high as 1,307 meters, making a stunning sight. The most beautiful way to visit the fjord on your Norway holiday packages is by boat, and fjord travels and touring visits are copious, a large number of which leave helpfully from Bergen. Travellers will likewise appreciate investigating the smaller branches like Naeroyfjord, an astounding 17-kilometer stretch with precipice dividers that are just 250 meters separated and tower in excess of 1,700 meters over the water. Another top goal is Fjærland, the area that houses Europe's greatest ice sheet, Jostedalsbreen, and the Norwegian Glacier Museum.

The biggest of Norway's exhibition halls committed to their nautical predecessors, the Viking Ships Museum in Oslo highlights three ninth-century Viking boats, Vikings. The biggest of these is the 70-foot Oseberg Ship, which worked around AD 800, is beautiful and significant. The exhibition hall is likewise home to the Gokstad Ship, which is a noteworthy 23 meters in length, and the Tune Ship. Tourists can likewise see a few displays and movies on their Norway packages, which center around the significance of oceanic life for that culture. The Viking Ships Museum is worked by the Museum of Cultural History, just like Oslo's Historical Museum, which contains curios from around the globe and since the beginning, from Egyptian mummies to the historical backdrop of gold coins. This gallery is additionally home to an extending Viking Age display, which contains an uncommon all around protected Viking head protector.

One of the most mainstream touring places in Bergen is the Bryggen Hanseatic Wharf, a dynamically painted zone, which was at one time the focal point of trade, commanded by Hanseatic traders. Travellers can locate a few memorable structures on their Norway travel packages from India, which depict life during the Middle Ages, just as boutiques, cafés, and the Bryggen Museum. Learn considerably more at the Hanseatic Museum, which has been open since 1872, housed in Finnegård, a 1704 home, which was claimed by one of the shippers. While in Bergen, guests will likewise need to visit Troldhaugen, the previous home, and a workspace of author Edvard Grieg, just as the Open Air Market.

With transcending mountains, Åndalsnes is an ideal destination for the individuals who love climbing and being outside. The view is an exquisite one, and the port town of Åndalsnes shows it off in the entirety of its greatness with strolls and excursions intended for guests with various physical capacities and various stipends of time. The Nebba post point, for instance, is only a 20-minute stroll from the downtown area. There are Trollstigen and Trollveggen, one of the most well-known vacationer goals in Norway that one must not miss while on their Norway trip package. Guests can head up the lofty way to Trollstigen - watching out for trolls, obviously! - to discover palaces, sensational mountain tops, and lovely green valleys.

Svalbard is a gathering of islands situated between the Arctic Ocean, Barents Sea, Greenland Sea, and the Norwegian Sea. The population here is 3000, about which is all gathered in the primary settlements of Longyearbyen and Barentsburg on Spitsbergen. Svalbard has visitors from all over the world that come to experience Arctic nature at its rawest on their Norway tours. The islands include immaculate ice and jagged mountains. Different animals like polar bears, caribou, reindeer, polar foxes, whales, seals, and walruses. Out of the total islands of Norway, 7 are in Svalbard. Norway's national parks are made to guarantee the protection of nature for people in the future. 60% of Svalbard's territory is ensured. The seven national parks are Forlandet, Indre Wijdefjorden, Nordenskiöld Land, Nordre Isfjorden, Nordvest-Spitsbergen, Sassen-Bünsow Land, and Sør-Spitsbergen.

Best things to do on Norway Tour Packages

Norway is a country where the ancient and the modern coexist peacefully. There are many things to do in Norway, which is blessed with a rich history, distinctive culture, and lovely customs. Check out these top activities to do in Norway to assist you and create the ideal trip.

The Trolltunga trek is Norway's most popular and spectacular climb. The Troll's tongue is the ending of the trek that makes for the ideal backdrop for imaginative photos. The hike is long, challenging yet mesmerizing with the roundtrip distance of roughly 28 kilometres (17.4 miles). Planning the ideal day out for Trolltunga hike with your loved ones will result in a tonne of thrilling memories and exceptional photographs. Visit this magnificent region of Norway to add an extraordinary experience to your Norway trip itinerary.

Admire the beauty of the Arctic Cathedral

The Arctic Cathedral is a striking building, which was built in 1965, resembles a large block of ice. The extravagant piece of artwork was designed by Jan Inge Hovig, a Norwegian architect. Along with its stunning outside architecture, it also has luxurious interiors. A stunning interior with shimmering mosaics and the famous glass façade emblazoned with a big crucifix is enough to astound you. The cathedral looks even more impressive during the winter, when it is lit up from the outside. You won't regret visiting this location if you want to feel calm and serene while enjoying the cathedral's distinctive decorations.

The historic port district of Bryggen is dotted with bright red, orange, and white Hanseatic Houses, which were utilised as commercial properties from the 14th to the 16th century. Visit the fish market or take a ride on the Fløyen funicular for a tremendous bird's-eye view of this picture-perfect town. Explore the narrow, cobblestoned streets while taking in the breathtaking scenery.

Visit the Arctic Circle for Midnight Sun or Northern Lights

Take a journey along the breathtaking Atlantic Ocean Road

Don't pass up the opportunity to discover the picturesque Atlantic Ocean Road and its breathtaking vistas. You'll travel over a 5 mile (8.05 km) stretch of wild but beautiful coastline, passing quaint fishing towns and attractive landmarks like old churches. The famous Troll's Church Cave is one of the primary attractions along this Norway's most popular tourist path.

How to reach Norway from India

Between the two locations, the total aerial distance is approximately 6743 kilometres, and the quickest method of transportation from India to Norway is by air. Although there are 98 airports in Norway, Oslo Gardermoen Airport is the busiest and it manages the majority of international flights entering Norway. You can fly to Norway from every major Indian city, including Delhi, Mumbai, Chennai and more. Unfortunately, there aren't any direct flights between these two nations, but various connecting flights are available. A flight's total travel time will be between 12 and 15 hours. Some of the airlines that fly between Norway and India are Qatar Airways, Lufthansa, Air France, Swiss Air, and Finnair.

Visa guidelines and requirements for Norway

If you are a citizen of a non-Schengen nation and are travelling to Norway, you will require a Schengen visa. You must submit some required documents for a Norwegian short-stay visa in order to ensure a smooth process and to show the Norwegian Embassy that you meet the requirements to be permitted to Norway.

An ideal 16 night Europe itinerary for a Solo getaway

The best ever luxurious Scandinavia itinerary for 5 nights

A 11 night Scandinavia itinerary for a great family vacation